With the announcement that Lockerbie bomber Abdelbaset al-Megrahi is almost certain to be freed, the question going through most people’s minds is WHY?

Libyan Abdelbaset al-Megrahi was sentenced to a minimum of 27 years in prison, after being convicted of the Lockerbie bombing, resulting in the deaths of 270 people.

The decision to release al-Megrahi is allegedly based on compassionate grounds, as apparently he is suffering from an advanced case of prostate cancer. This quickly follows the recent release of the Great Train robber, Ronnie Biggs, who was also freed on the same terms. However, unlike al-Megrahi, Biggs was not a murderer.

Many have suggested that the decision to release Biggs was designed to make it easier for the government to allow Abdelbaset al-Megrahi his freedom, in a deal made between Britain and the leader of Libya Muammar Gaddafi. 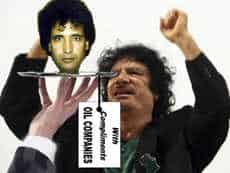 Obtaining al-Megrahi’s release will be of benefit to Gaddafi’s image at home as a “world” player, but more importantly will help the countries involved in Libya’s oil industry. Libya is a major source for oil in Africa, and where there is oil, there are dubious deals being carried out under the table.

US Secretary of State, Hillary Clinton, has tried to intervene in the Lockerbie bomber case, where 189 Americans were killed on Pan Am Flight 103, and has stated that Abdelbaset al-Megrahi should die in prison. This is almost certainly the view of the families, relatives and friends of those who were lost in this attack.

However, whilst Hillary Clinton’s actions may seem genuine, you can be fairly sure she fully understands the motives for releasing the bomber, a decision that the Obama administration will support, because it benefits the oil companies involved in Libya (companies from the UK, US and Russia, among others). This might also explain why Clinton has been making her appeals through less official channels.

As we have seen in Iraq and Afghanistan, there are no limits to what governments will do in order to support the huge profits made by oil companies, usually at the expense of the armed forces (in the case of the wars in Iraq and Afghanistan), and the general public who suffer from the “fallout” of these wars and the questionable methods used in promoting the so called “war on terror.”

With thousands of troops being killed and severely injured in wars that are fought for oil, we should not be surprised about the release of Abdelbaset al-Megrahi. The only surprise is that some members of the public still find it hard to believe that their leaders are capable of such things. Believe it!

Are you getting ready for Halloween?