John Kerry has been a thorn in the side of the American people for many decades. His stupendous decision-making power almost led to a major political scandal in 2004 while he was running for president. People may say it was his falsified military record in Vietnam, but it was far bigger than that.

John Kerry’s inability to see right from wrong went deep enough to affect the running mate he chose as the vice-presidential portion of his Democratic ticket in the 2004 campaign. How many people remember that choice was Senator John Edwards of “love child” fame?

The flamboyant, perfect-haired trial attorney-turned-U.S. senator from North Carolina was having a torrid affair with a woman when he was Kerry’s running mate. While his wife, Elizabeth, was suffering from terminal cancer back home, he was running around with the younger woman, even getting her pregnant.

It wasn’t until The National Enquirer, of all the media outlets in the world, uncovered the lurid affair did the American people find out just how questionable John Kerry’s judgement could be. Had he won the 2004 election against George W, Bush, the scandal that would have ensued with the discovery of just how slimy his running mate was would have been catastrophic.

But the kept man from Massachusetts, married to the heir to the Heinz catsup fortune, Teresa Heinz, has been subordinating American politics and diplomacy since he threw his Vietnam War medals over the White House fence decades ago. As a liberal senator from a northeast sate, he barely made any mark in the Senate, much less on the field of diplomacy as secretary of state for Barack Obama. 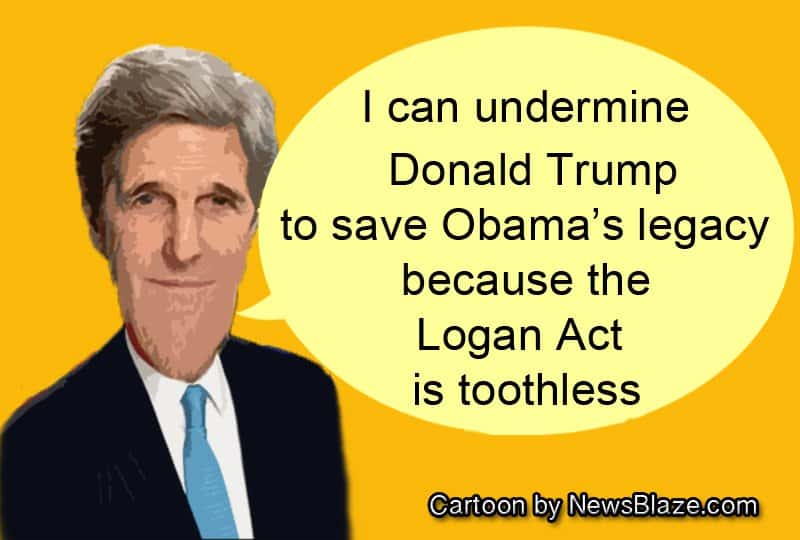 But that doesn’t stop this boat anchor in the history of the Senate and State Department. He has spent his whole life getting it wrong. From coming home from the war in Vietnam to trash as war criminals the men with whom he wore the colors, to his handling of one of America’s greatest threats to our security, count on John to get it wrong.

None of this has ever mattered to the Democrats. They forgave his life of lies and elected him to the U.S. Senate from Massachusetts. They even nominated him to be the president of the United States, but he managed to crash and burn that opportunity.

Barack Obama was enthusiastic to find such an apologist of America to be his secretary of state after Hillary dashed off to become the worst presidential candidate in modern memory. Kerry managed to reduce American foreign policy to sackcloth and ashes, bowing to the Muslim world.

Once the country was done with eight-years of Obama, we thought Kerry would drift out to sea in Teresa’s yacht. But we were wrong. He came back to avenge Barack Obama, Hillary Clinton and the elites who had taken such a shellacking from “the deplorables” and “the irredeemables.”

Kerry has done his best to sabotage President Trump’s attempt to fix or trash the infamous Iran nuclear deal that was “the signature accomplishment” of the Obama-Kerry administration. The two of them were an utter abomination of incompetence who had no right to direct school bus crosswalks, much less guide the destiny of America.

According to the ultra-liberal Boston Globe, known to fawn all over Kerry in the past, he has been colluding secretly with Javad Sarif, the foreign minister of Iran. Why would a former secretary of state, long out of government do this? As Kerry puts it, “to strategize” on how to preserve the Iran Nuclear Deal these two mutton heads drew up for President Obama to sign.

Remember, Kerry is not a part of the present government. He is not authorized to do anything and is instead running wild inside of Donald Trump’s foreign policy. Is there a shred of outrage from the Trump-hating media? Would they stand for this had Bush’s former secretary of state done this to their God Obama?

Ladies and gentlemen, it is against the law, as per the Logan Act of 1799, for Kerry to do this. But that aside, common sense would dictate, someone who should know better should not do this. This crosses the line between legitimate advocacy and attempted sabotage of a duly constituted U.S. Government.

What he is doing is “unauthorized shadow diplomacy.” He is a mischief-maker. At the very least, he should be relegated back to his rich boy toys and placed aboard one of his many sailboats for a long ride to nowhere. At the other end of the spectrum, he should be prosecuted for violating the Logan Act. Like most liberals, he thinks the rest of us are stupid and he knows what is best for the country. That is why he/they are out of power and will stay there.

Kerry’s carefully crafted collusion with the mullahs in Tehran has been unraveled by the Trump administration. It is a total disgrace from top to bottom leaving this country perilously close to a possible nuclear showdown with either Iran or their handlers in Moscow. Leaving this up to Kerry and Obama would lead to that inevitable confrontation.

Someone needs to call Teresa to pick up her wayward husband. The harbor master has signaled it’s time for tea in the world he cherishes most; the one where they think he’s smart.