Joe Biden is betting on voters’ so-called nostalgia for the eight years of Barack Obama. Yes, it appears Joe wants to take America back to the good old days of the Obama administration, when he was the vice president for both four-year terms.

What would that look like electorate? Remember Obama’s vision of the “new normal?” That would be the American people getting used to fewer people employed and a stagnant American job market.

Remember Obama said “Some of those jobs from the past are just not gonna come back”?

Ah, the good old days, right Joe? Going down memory lane, we can remember the GDP was 1.9 percent when these two ‘giants’ left office. The duo even said, with a parting shot pointed at Trump, that his vision of economic growth of three percent or better and the return of manufacturing jobs was a “pipe dream.”

Well, their next jobs weren’t telling people’s fortunes, because they were flat out wrong. According to the Dept. of Commerce, economic growth under Trump has reached 3.1 percent. Manufacturing jobs have returned in many industries and unemployment is at the lowest rate in nearly 50 years. 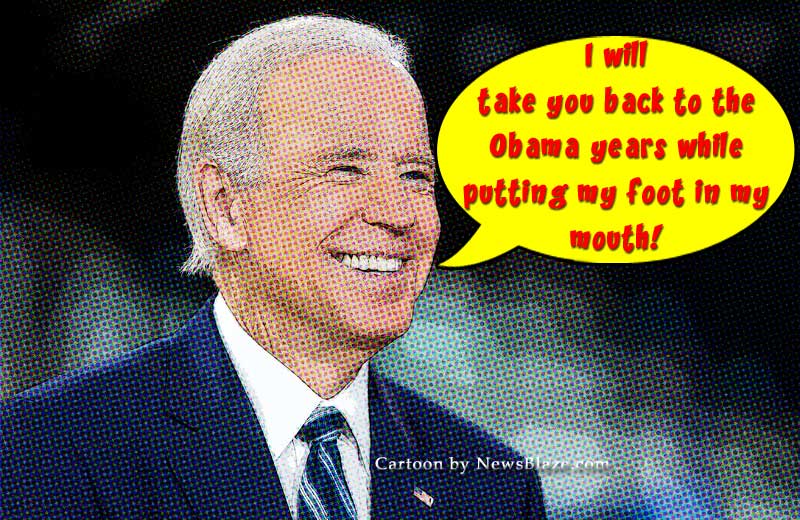 That’s not all Joe. Wage growth is up, as is the stock market, and remains at record highs, other than minor blips. Add to that the lowest African American unemployment ever, the same for Hispanics and near records for women.

What do millions of Americans think of Joe’s idea of a return to the Obama years? Right now, their IRAs and other accounts are producing more income by far, compared to those “golden Obama years.”

Maybe Americans miss Obama bowing to foreign leaders; literally. They cringe perhaps as President Trump becomes the first president in memory that stands up to Beijing.

China is a dictatorship that stole American intellectual property for decades. They send spies to steal military secrets, and benefit immensely from unfair trade agreements made by political hacks.

For years, Republican and Democratic regimes cowered before the Chinese. Obama and Biden’s replacement demands equal trade policies and risks his own political stock (guts) to achieve it.

This president doesn’t lead by polling numbers, but rather what is best for all Americans, not a voting base.

Astoundingly, or maybe not, Biden takes credit for this economy. Huh? He improbably claims it was Obama’s policies that have brought the surging tide.

But if that is so, why did none of it happen during Joe and Barry’s floundering administration? They constantly said for eight long years they were “rebounding” from Bush’s 2008 recession. Eight years’ worth of rebounding?

That’s not all. Biden promises to improve education. You may ask correctly why his eight years didn’t do that? But Joe has a host of bellyaches now that he thinks were not major problems during his years with Obama. It’s a chronic politician’s disease called “convenient memory.”

So what can Americans really expect from ageing Joe trying to fit in with his far-left presidential opposition? Well, let’s see, how about the usual Democratic cure for everything; higher taxes? How about re-imposition of regulations Trump dumped unceremoniously? And don’t forget nominating liberal, legislate from the bench, federal judges?

Ah, the good old days, right Joe? Yep, “free” healthcare, “free” tuition, “free” Medicare for all, open borders, “free” universal healthcare for illegal aliens and heartache for the millions that pay for it all. You can hear Joe say, “Y-all come on in and vote for the guy who gave you free stuff.”

Joe Biden is a relic of the past. Whoever beats him to the nomination may be a whole lot worse, but enough voters know where Biden is really coming from. Maybe not in the primaries where the Demos go left, but in the general election.

There is likely to be major slaughter at the polls as Americans say no to Joe and all the far-left, “give them free stuff,” “progressive” lunatics.