Last week Governor Mike Pence signed a law which is supposedly about religious freedom (already protected by the First Amendment of the U.S. Constitution) but which, because Indiana doesn’t protect against discrimination against gays and lesbians, actually says the state won’t enforce any anti-discrimination steps taken by businesses, such as refusing to serve certain citizens.

But, as with all such attempts to legislate aspects of human behavior, this law, put forward by groups which SAY they are strongly against more government regulation and laws, only demonstrates forcefully that people in favor of discrimination always forget that someday they may be in a minority and be desperate to have protections afforded by law.

Freedom of religion wasn’t put in the constitution as a club for the religious to wield against anyone they don’t like, but to protect the minority (ANY minority) against actions by the majority. Since church attendance and even belief in god is declining in the U.S., Europe, and elsewhere, those who seem so desperate to suppress any minority must have forgotten that whether they are against atheists, or Hispanic immigrants, or Muslims, or any other rapidly growing group, old white men (including me) are becoming a minority and should be fighting against discrimination in any form, not fighting for it.

On a news show this morning, and probably in other interviews, the Indiana Governor more than a dozen times flatly refused to answer with a simple yes, or no to this question posed by George Stephanopoulos: “Should it be illegal to discriminate against gays and lesbians?”

The governor refused to answer.

Over and over he was asked and all he did was complain that people were criticizing him and his state for not taking a public stand against discrimination. 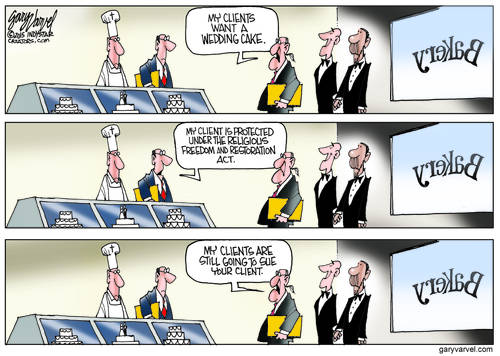 There are obviously TWO possible reason for refusing to answer such a question – he was afraid of those who do want to discriminate, OR he simply DOES support discrimination himself.

But the moral bottom line here is simple.

In recent memory just here in the United States, the home of freedom, discrimination has been public and popular against Jews, the Chinese, the Irish, then the Italians, then Hispanics, and seemingly forever, blacks.

Today many people are afraid of terrorists who want to discriminate against practically EVERYONE but themselves.

But the people who are so ready to declare war (sending other people’s sons and daughters to fight and die, not volunteering to go themselves) because of a few fanatics, are anxious to discriminate against those who aren’t just like themselves.

Perhaps they should be aware that right here in the U.S. during the next decade it could be Baptists who Methodists don’t want to serve food to, or Christians that atheists won’t make flower arrangements for.

What is it about human nature that makes certain people want desperately to tell other people what to do and how to live?

Are they desperately trying to prove to themselves that their way of life MUST be the only “good” life.

Those so ready to condemn others seldom apply the same rules rigorously to themselves as virtually every politician and dozens of televangelist confessions make that clear.

Could this refusal to mind their own business be the real root of all evil?

Should the 11th commandment have been “Thou shalt mind thine own business?”

Certainly “money” isn’t the root of evil because even the Bible says it is the “love of money” which is the root of all evil, not money itself.

The vast majority of evil from witch burnings to Hitler’s Germany which we’ve seen over the centuries shows unquestionably that the desire to force other people to live the way YOUR group, political party, ethnic group, or church, says they should act and live has been the source of more suffering, killing, and pure evil than money.