As the Inquiry continues, it becomes clearer how the invasion of Iraq came about and who was responsible for it, but most of us knew that already!

George Bush and Tony Blair were both guilty of promoting lies to justify the invasion of Iraq, but we will not hear about the people they were working for.

Perhaps, in times gone by, a President or Prime Minister might have had the power to make a decision on whether to go to war or not, but that is certainly not the case anymore. The people who really have the power are incredibly rich and have control of all the important industries.

If you look at who owns the oil companies, arms industry, media, banking, and financiers of key organizations (like the UN) and then ask who benefits the most (financially) from having such a war, you immediately discover who is really pulling all the strings.

Let’s not forget that Saddam Hussein was an ally to the West (especially the US) for some time, so what changed all that? Was it the pain and suffering he inflicted on his people? Hardly, wasn’t he doing that when the US saw him as a friend? 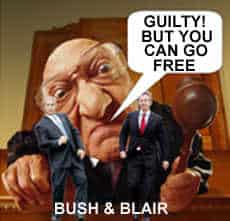 While Saddam was allowing western companies to profit from Iraq’s oil, his mistreatment of the Iraqi people was of little importance, he even received weapons from the US (which were used in the war that Saddam started against Iran).

Unfortunately, Saddam’s “terrible” crimes only became noticeable when he decided he no longer wanted to be a US puppet and took control of the oil supply.

After failing to comply with western demands, sanctions were applied and then stories appeared about WMD (Weapons of Mass Destruction – Nuclear or Biological weapons).

A politician made an interesting comment today when he said that if Iran was to obtain nuclear weapons, this would encourage others to do the same (to obtain some equality). This is usually what happens in an arms race and there is truth in his words. But for some reason he did not mention the nuclear capability of Israel.

If Iran are really looking to create a nuclear weapon (which has not been proven yet), could it be because they are looking to obtain some military balance? And is Israel’s determination to stop them simply a way of retaining their unfair advantage?

I feel sure that if Israel were to agree to remove its nuclear weapons, but keep its conventional military force (which is still superior to its neighbours), Iran would no longer feel so threatened and almost certainly would agree to forget any nuclear ambitions (if they truly exist).

The US and its allies are spending huge sums of money trying to take the oil by force (costing the lives of millions of military personnel and civilians), when it would be so much cheaper to simply buy the oil (at a fair price) from its rightful owners.

Sadly, the Iraq Inquiry is only going to prove (at best) that Bush and Blair were guilty of underhand tactics. What it will not do is encourage a court of law to try them for war crimes. Most of the authorities capable of bringing these two to justice are controlled by the same people they are.

The only result we can expect from the Inquiry is frustration at being told “You were right,” but the guilty will walk free again as usual. It would be much better to forget this time wasting show and use the money it is costing to look after the troops, their families and the civilians affected by all the deaths. These are the real victims of the rich man’s war for oil.