2016 presidential loser Hillary Rodham Clinton is still seeking an audience for her excuses about her stunning defeat. She outlines those reasons for anyone who is willing to hand over cash money to read it.

In her upcoming book, she will double down on Russia’s interference and former FBI Director James Comey‘s involvement. Apparently those were the real reasons the bitter and angry Hillary is not president. The American people were duped by those circumstances, not because she ran a horrible campaign.

Hillary has told intimate friends that she “wants the whole story out there” as her publisher, Simon and Schuster, rush to get the book out in September. Promotional press releases scream the “whole truth” will be exposed. The operative word used repetitively is “bombshell.”

The personal account will focus on how the evil Russians and slimy Comey cost Clinton the White House. It runs counter to Democratic Senate Minority Leader Chuck Schumer’s (D-NY) view that it was merely a “disappointing” defeat. That is code for “Go away already.”

Schumer told the Washington Post, “When you lose to somebody who has 40 percent popularity, you don’t blame other things; Comey, Russia. You blame yourself. So what did we do wrong? People didn’t know what we stood for, just that we were against Trump. And still believe that.”

Gosh Chuck, that isn’t the truth? Then what have the American people been watching on CNN the last seven months since Trump’s inauguration; food recipes?

Such “rare clarity” from resistance fighter Schumer may not be heeded by the tone-deaf Clinton. Her day in the sun has passed and the Democratic leadership wants to close that ugly chapter and move on. There are more and better progressives like progressive Elizabeth Warren and socialist Bernie Sanders, So there.

Schumer is part of the re-facing of his party. On Monday he unveiled the congressional Democrats’ new message of “A Better Deal.” It is not certain what that really means, but in Madison Avenue language, it is “New and improved.” The more nebulous, the better the message.

At the heart of the “message” is an implicit hint to Hillary Clinton. That would be “Out with the old and in with the new,” like aging Bernie. Schumer is not alone in the Democratic Party’s subtle message for Clinton to spend more time with the grandchildren. Former Vice President Joe Biden (remember him?) has criticized Clinton’s message during the 2016 cycle and beyond.

Biden told a University of Pennsylvania crowd in March, “What happened was that this was the first campaign that I can recall where my party did not talk about what it always stood for, and that was how to maintain a burgeoning middle class. You didn’t hear a single solitary sentence in the last campaign about that guy working on the assembly line making $60,000 a year and a wife making $32,000 as a hostess.”

Naturally, Joe being Joe, he was selling his new Penn Biden Center for Diplomacy and Global Engagement. He just wanted to stick a needle into a potential 2020 presidential opponent should the DNC feel that election should be a retrospective on refried candidates.

But damn the torpedoes from her own party elite. Hillary seeks scapegoats for her own failures. Her book will not suggest that merely the Russians and Comey forced her political exile. There will be an abundance of other excuses including sexism and misogyny.

The apologist told a gathering at last month’s BookExpo, “We need to pull it out and put it in the bright light.” That ought to sum it up.

Apparently the American people have a deep need to know and will line up 12 deep to get the truth. Meanwhile, author Clinton toils with her former speechwriter, Dan Schwerin, who helped write her last book. That was a miserable bookshelf failure entitled “Hard Choices.” Her publisher is taking a huge risk with the track record of miserable past book signing turnouts and lackluster sales that followed the last stinker.

There is hope however that Clinton will accept some responsibility most responsible parents demand of their small children. At a Recode tech conference in May, Clinton said, “I take responsibility for every decision I make.”

Bravo Hillary. Unfortunately she was not through with the paragraph. She went on to say, ” … but that’s not why I lost.” Ward and June would be very disappointed.

She has also been working with another political has-been, Howard Dean, and a small group of aides checking in with states and organizations to find out what their challenges are and how she can be most helpful. No reports of her door being kicked in by hordes of supporters asking for her experienced advice.

But not unlike the fading movie star Norma Desmond in the film Sunset Boulevard, Hillary clamors for the national spotlight. Earlier this year she launched a PAC, Onward Together, with the intention of helping congressional Democratic candidates in 2018. No reports of potential candidates seeking her advice so far. Hard to imagine anyone asking for advice from a woman who lost the most stunning election in presidential history.

Let’s just say she’s playing the long game in hope of short memories. Hillary wants to make sure the resources coming in to Onward Together have maximum impact. It is much like fading Hollywood queen Norma Desmond thinks silent movies will be coming back soon. 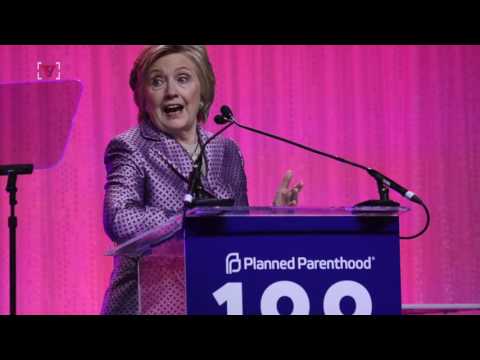