NewsBlaze News
Home USA Politics Did She Or Didn’t She? The White House Doesn’t Know

WASHINGTON – (Newsblaze) The White House on Monday was unable to tell reporters whether former Secretary of State Hillary Rodham Clinton had broken the law in archiving her electronic communications as the nation’s chief diplomat.

ABC White House Correspondent Jonathan Karl asked White House Press Secretary Josh Earnest directly “I want to try it again, and I want to plead to you, please do not refer me to the State Department. I’m going to ask you something about the White House, and my question is a very basic one. So my direct question is: Does the White House believe that Hillary Clinton broke the law? Yes or no.”

Earnest pleaded for an opportunity with Karl by saying “Just give me a chance. That if, in fact, what Secretary Clinton’s team said they were going to do, that they did, and that can be verified by the State Department who is responsible for maintaining these records, that would be entirely consistent with what the Federal Records Act requires.

So again, I’m not in a position – I was not in a position to review Secretary Clinton’s personal email. That was the responsibility of Secretary Clinton and her team. That’s what they say that they did. They say that they turned over thousands of pages and thousands of emails, including many that were already on the State Department system. And that entirely consistent with the requirements of the Federal Records Act.”

In recent days, news reports have surfaced that Clinton had registered an internet domain name on the day of her confirmation and used an email address of “[email protected]” and the possible 2016 Democratic Presidential candidate did not have a government email address. 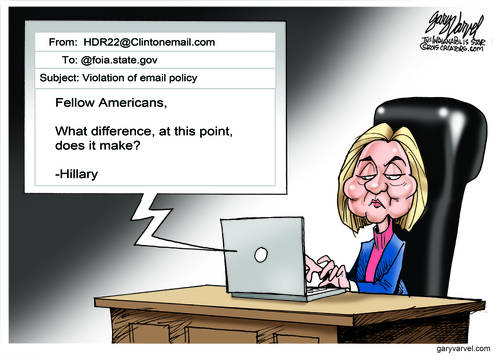 Now, it’s not incredibly uncommon for one of you, or one of your colleagues, to send an email to my personal address. A few of you have it. But when I do that, I will answer the emails – which I try to be pretty good about doing – but then I will take that response and forward the email to my official account so that the record of that email exchange can be properly preserved.”

Thousands of people inside and outside of the administration must have seen emails from the former Secretary of State. Didn’t anyone comment on how strange that seemed? Didn’t anyone suggest there might be a problem? Didn’t anyone query whether emails were being preserved? Did Hillary Clinton ever email Josh Earnest or President Obama or anyone at all who might understand the possible implications?

Josh Earnest will address reporters on Wednesday in the West Wing.