It would be an understatement to say the Democrats are under pressure to win Georgia’s open House seat in just over two weeks. The DNC and the cheer-leading, left-leaning, media have made it that way. In effect, to keep any credibility on the extreme promises both organizations have made, this is the last lap to do so.

They have this one last chance to define an election that proves to be a Trump backlash. That hasn’t happened with any of the previous ones they claimed they would win. They didn’t win!

Their excuse after the other losses is they were “close” in reliably red districts. But so far, there is no victory lap. The DNC failed to convert liberal hatred of Trump into an actual win in this year’s special elections. That ramps up the pressure even higher for Democrat Jon Ossoff to pull off a win on June 20.

A victory in the suburban Atlanta district will create a national model the party can use to flip more seats in the 2018 midterms. That’s the plan, but the plans so far have been a bust. Polls show Ossoff and Republican Karen Handel in a statistical dead heat.

The Georgia district is seen as Democrats’ best opportunity to flip a district that has previously elected solidly Republican representatives such as former Speaker Newt Gingrich. It was last held by Health and Human Services Secretary Tom Price (R).

The race comes after Democrats fell in a Kansas special election, then in a closer-than-expected race in Montana that followed the GOP nominee’s physical altercation with a reporter that he still won. The DNC has defended its strategy, pointing to polling and data that aides say accurately reflected the Montana loss.

The discussion has become talking points to justify defeat. The reality is the party can’t ignore traditionally red districts in places like Montana and Kansas. The argument is they are saving their cash for the 2018 campaigns. But is that the smart move? The liberals and their media allies are busy trying to convince Americans they should hate Donald Trump.

The results of these elections say otherwise. The pressure is unfairly on young Ossoff. Democrats are outspending Republicans in the runoff, with the DCCC spending another $3.6 million to prop up Ossoff, according to an Atlanta Journal Constitution analysis from late May.

All that money has Ossoff slightly edging out Handel, but still within the margin of error. Republicans have cautious optimism. Their candidate, a former Georgia secretary of State, has consolidated GOP support and raised the spending level as the sole Republican.

Recently, Republicans launched a series of attacks on Ossoff in the final weeks. They are going after his questionable national security credentials as a mere congressional aide. Add in a pro-Trump outside group, America First Policies, ready to debut a $1.6 million TV ad campaign on that very subject. That spells real trouble for the Democrat’s last best hope.

Trump traveled to Atlanta to headline an April fundraiser that brought in $750,000 for Handel’s campaign. But the race will come down to who actually turns out. The first few days of early voting and registration indicate the electorate could be larger than in April’s primary.

The race will remain a nail-biter to the end. The pressure is on the Democrats to produce at least one winner in the anti-Trump climate they have created. The liberal media will do their part to make it happen. If things don’t work out, maybe Hillary Clinton can help explain it away as a Russian conspiracy. 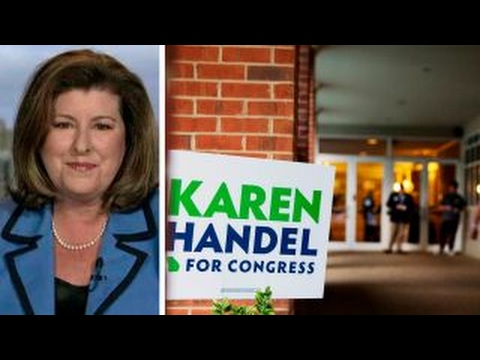