A deep state of anxiety and sheer panic rose across America last Tuesday. Most Americans were unaware of its far-reaching implications. It was not the news that more factories in this country had shut down or that unemployment was up.

No, it was the almost unabashed shock and awe of the nation’s liberal commentators being unmasked by a new national poll. The analogy could be the light being turned on and cockroaches scattering, but that is a bit too graphic for most readers.

But that one national poll released by Monmouth Tuesday morning may as well have been a bomb set off at the studios of MSNBC in New York. The “Morning Joe” was literally in panic mode and affixed as talking heads to the teleprompter to express their scripted emotions.

The singular reason for the stressed expressions was the poll’s findings that three out of four Americans believe in the existence of a “deep state.” That’s right Joe and Mika, the jig is up and the American people have proven once again they may be deplorable, but they are not oblivious.

A visibly frightened Mika Brzezinski squealed to the camera, “The attacks against the so-called deep state by the president and some Republicans actually might be taking hold.” Then, moving nervously in her chair, she added, “More Americans now believe that national policy is being manipulated or directed by a deep state.” 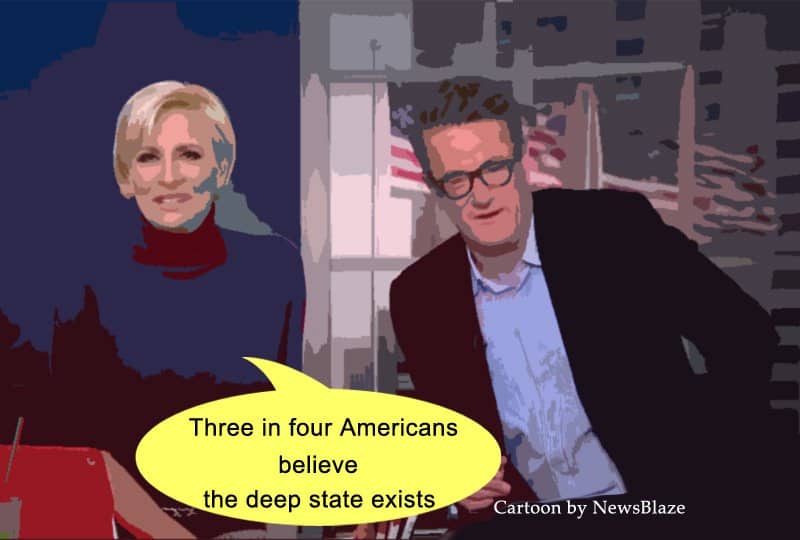 Had any viewer come to the show late, Mika’s expression dictated the look of announcing an armed invasion or Martians landing. But it was true, the newest Monmouth University poll had shone a harsh white light on Mika and thousands of other swamp creatures her arch enemy, Donald Trump, had already described in detail.

As Mika’s eyes fluttered and showed traces of tears, she said, “Six in 10 Americans believe that unelected or appointed government officials have too much influence in determining federal policy. Twenty-six percent say the right balance of power exists between elected and unelected officials.”

You could feel her pain as she was literally forced to report actual facts. That in itself can be tortutous for an MSNBC teleprompter reader.

It can be universally accepted that Mika and Joe don’t accept the conclusions. They know their job descriptions and that is to re-tool the stated facts. When the poll described the “deep state” as a group of unelected nongovernment officials and 75 percent of respondents said they believe there is a group of power players pulling the strings, to Mika and Joe, that’s not really what it said.

Leaning on the wisdom of Hillary Clinton, Mika thinks it is a dubious poll at best. More than likely many of the women who were polled had been influenced to say what they said by their husbands or other male pigs. Any input from states other than blue should be discounted as unproductive citizens screwing up the final tally. Surely the viewer already knew this. Their numbers are smaller than the city of Toledo for heaven’s sake.

Brzezinski then put on her lecturer hat. She pontificated that “When Monmouth described the term as, quote, a group of unelected government and military officials who secretly manipulate or direct national policy, nearly three in four Americans said they believe that the deep state exists.” But Mika knows the true intellect of her audience, so she did the math for them. She instructed them, “One in five said it does not.”

Whew, Mika to the rescue. Now it all makes sense. There is a silver lining in that dismal poll. Now we can really punch out some hidden numbers to provide crystal clarity to the true meaning of these misinformed American knuckle heads.

The poll is a shocking reality for the MSNBC love birds. It is hard to digest that Americans actually think for themselves. To Mika and Joe, it is a phenomenon in these modern times of commentary, not facts. To these people, it is a shocking finding and one that could be job-threatening.