The Republican Party of Volusia County awarded Lloyd Marcus the 2007 Above and Beyond Award at their Annual Lincoln Dinner. The dinner took place Saturday, May 26, 2007 at the Ocean Center Daytona Beach, Florida. Marcus was also nominated for Republican of the Year Volusia County.

For more information about the dinner visit: volusiacountyrepublicans.org 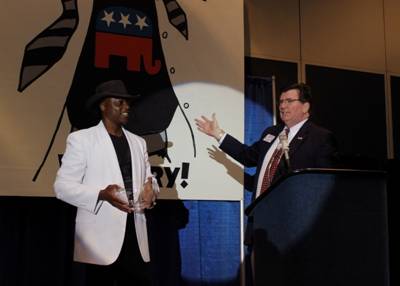 About Lloyd Marcus: For the past five years, singer, songwriter, producer, art director and fine artist Lloyd Marcus has lent his talents to promote Conservative values. Marcus designs the logo and staging, produces the entertainment program and has performed at the last five Republican Party of Volusia County Lincoln dinners.

Outspoken about his beliefs, Marcus’ letters have been published in various national publications.

Marcus is proud to be an American. He supports President Bush and the troops in the War against Terror. He performs at major troop support and patriotic rallies around the country singing his original uplifting songs. In 2004, Marcus warmed up a crowd of 13,000 for President Bush’s speech. Marcus also performed at a President Ronald Reagan Inaugural Ball.

When asked about his conservatism, Marcus replies. “When I was 8 or 9, my family moved from a Baltimore ghetto into a brand new government funded housing project. In a few years, the residents transformed it into a huge ghetto. Only a few kept their apartments nice. It taught me that the ghetto is a mindset. People do not respect what they don’t earn. A helping hand in a time of need is a good thing. But cradle to grave welfare is extremely destructive to self esteem and impedes the human spirit.”

In February 2006, Marcus’commitment to his conservative principles was severely tested. His paintings were banned from a city hall Black History Month Exhibition due to �religious themes�. As president of the local arts center, Marcus solicits the city to fund various projects. It would have been politically prudent to simply submit to the city’s discriminatory decision. Marcus chose to ignore the possible consequences and demanded that his paintings be reinstalled.

Only after Marcus filed a federal law suit against the city did they rescind their decision and re-installed his paintings. Media around the world followed and covered the story.

Marcus was called to Washington DC to address the Congressional Black Caucus regarding the incident and freedom of speech.