CBS This Morning host Charlie Rose interviewed former President Bill Clinton about his wife’s recent health issues, on Monday. This is a portion of that sit-down and the actual words:

Bill Clinton: Shes doing fine. She was even better last night before she went to sleep. She had a good nights sleep. She just got dehydrated yesterday.

Charlie Rose: Is that what happened? She just got dehydrated. Because when you look at that collapse, that video that was taken, you wonder if its not more serious than dehydration.

Bill Clinton: Well, if it is then its a mystery to me and all of her doctors. Frequently, well, not frequently. Rarely, on more than one occasion, over the last many, many years, the same sort of things happened to her when she got severely dehydrated, and shes worked like a demon, as you know, as Secretary of State, as a senator and in the year since.

Charlie Rose: But, more importantly, shes on a grueling campaign. And you know what that’s like, and she’s older than you when you ran.

Bill Clinton: And she had two and a half hard days before the day when she got dizzy. Today she made a decision, which I think was correct, to cancel her campaign day to take one more day to rest.

Charlie Rose: Is it possible she’ll be away for weeks from the campaign trail?

Bill Clinton: No, not a shot. I’ll be lucky to hold her back another day. 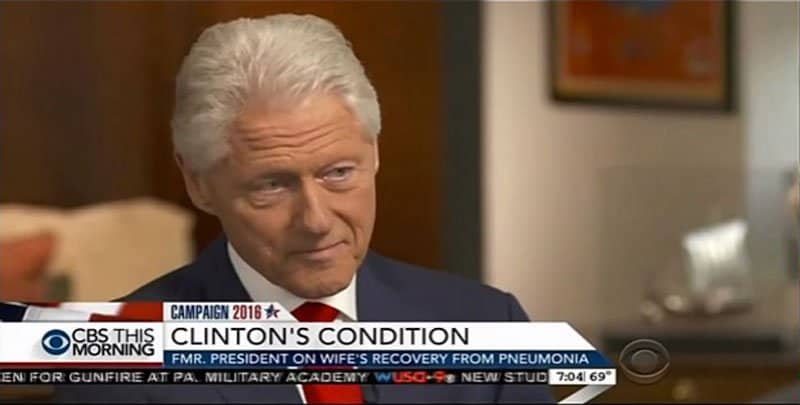 The problem all Americans should be aware of is the editing of the interview which took a curious left turn when it was broadcast that night on The CBS Evening News. They removed Bill Clinton’s statement that his wife, Hillary, frequently fainted in the past.

Really, she did? The voting electorate is purposely being misled by CBS News and their obvious bias toward the Democratic presidential nominee. Bill Clinton was attempting to clear the air Monday about all the public uproar over his wife’s collapse by an SUV last Sunday after she left a 9/11 memorial speech with the aid of Secret Service agents.

Bill Clinton had said, “Well, if it is, then it’s a mystery to me and all of her doctors,” he told Charlie Rose. He claimed Hillary was simply dehydrated and that the situation was not more serious. His response to the question of her health; “Frequently, well, not frequently, rarely, on more than one occasion, over the last many, many years, the same sort of thing happened to her when she got severely dehydrated, and shes worked like a demon, as you know, as secretary of State, as a senator and in the year since.”

Enter the CBS Evening News editing department; most likely on orders from anonymous higher-ranked executives. Their version edited Bill Clinton’s use of “frequently” out. A review by The Hill of the official transcript released by the network shows that Clinton saying “Frequently, well, not frequently,” is omitted on the CBSs News broadcast that night.

This is what is described as news broadcast to the American viewer? Is this what the Founding Fathers considered journalists? This is the free and bi-partisan press envisioned as a doorstop to this very sort of partisan situation? This is not what is expected from news commentators, expressing clearly labeled opinion. Rather the CBS Evening News is to be considered the source of impartial reporting, not taking sides in a political campaign.

Chuck Ross of The Daily Caller was the first outside source to discover the cover-up. He found that you can clearly hear the frequently word in the CBS This Morning video.

Naturally, a CBS News spokesperson labeled the misunderstanding as the reason for the editing done to the version on CBS This Morning on Wednesday. He/she claimed in a statement that editing had to be done on 20 seconds to fit the time slot allocated.

The operative word is unlikely. That portion of the video was a mere three seconds in length. That snippet being, “frequently, well, not frequently.”

Is anyone buying that explanation other than diehard Hillary supporters?