While President Obama has been fundraising this week in Los Angeles with stars including Will Smith, Magic Johnson, Melanie Griffith, and Antonio Banderas rallying by his side among more, Democratic Congressman Alan Grayson’s team will similarly host a very special event for the Democrats on November 12, 2011, produced by Ilene Proctor, with two celebrity fundraiser events in one day in support of the progressive leaders 2012 re-election bid.

A strong leader of the Progressive movement, Alan Grayson has written and introduced a vast array of popular legislation. He introduced the landmark legislation on healthcare (The Medicare You Can Buy Into Act, HR 4789), the clean elections (The Save Our Democracy Platform, HR 4431-35), peace and taxes (The War is Making You Poor Act, HR 5353) and employee benefits (The Paid Vacation Act, HR 2564), which combined, created a powerful Progressive legislative program.

Alan Grayson introduced and passed legislation preventing Wall Street from using bailout money for bonuses (The Pay for Performance Act, HR 1664), and he teamed up with Rep. Ron Paul to pass the Paul-Grayson Amendment, providing for the first independent audit of the Federal Reserve in a century, which uncovered $16 trillion in bailouts. 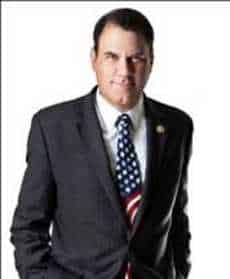 Alan Grayson’s Mandatory Mediation Program cut foreclosures in his county in half, and was so successful that the Florida Supreme Court ordered it adopted statewide. He attracted over 100,000 signatures on petitions against corporate money in politics, and 100,000 more signatures rallying against cuts in Social Security, Medicare and Medicaid. His 2010 campaign drew contributions from nearly 100,000 more people, far more than any other Democratic Member of the House. A congressional star, his YouTube channel is the most-watched channel of any Member of the House, with nearly ten million views.

Mr. Grayson has also been a forceful voice for what has been deemed ‘Progressivism’ in the media. For example, Alan Grayson smartly boiled down his party’s view of the Republican healthcare plan to the message; “Don’t get sick!” He has appeared on national TV hundreds of times, articulately defending his parties Progressive principles. A short clip of Grayson explaining ‘Occupy Wall Street’ on HBO’s Real Time with Bill Maher a few weeks ago quickly reached a half a million views on YouTube. MSNBC’s Rachel Maddow says that Grayson “has a knack for explaining Progressive ideas in clear, plain terms,” while MSNBC’s Ed Schultz has said, “this man is what it’s all about!”

Alan Grayson stated that “Wall Street controls our economic policy, big oil controls our energy policy, and the military-industrial complex controls our foreign policy.” His supporters add that “thanks to the Citizens United Supreme Court decision, Wall Street, big oil, and the money that the military-industrial complex can and has spent to defame and try defeat Grayson, Alan Grayson wants your help to fight back, and to fight for the liberal movement.” They declare, “Justice, equality, jobs, health and peace! Grayson for Congress!”

Catering by Picklz and Shirley Smith, with auction by Andrew Weiss Gallery.