F. H. (Frank) Buckley, a Foundation Professor at George Mason University School of Law, teaching there since 1989, chats to Dwight Schwab about issues around election 2016. F.H. Buckley is the author of “The Way Back: Restoring the Promise of America,” his most recent book. Prior to that, he wrote “The Once and Future King: The Rise of Crown Government in America.”

F.H. Buckley is a citizen of Canada, and on Tax Day 2014, he also became an American citizen. Currently, he lives in Alexandria, VA with his wife, Esther.

Dwight and Frank, both conservatives, have a conversation that covers this year’s approaching election.

F.H. Buckley, Author of “The Way Back” – Yes, please do. I am sitting here staring at a book entitled “Redistribution of Common Sense” by an author named Dwight Schwab? Any idea who that could be? (Laughter)

Schwab – I’m impressed. It isn’t often I interview an author who has also read my book. Did you find it to your taste?

Buckley – Yes, very well written. You obviously know the facts and nailed it in a way the readers could understand the Obama administration. One of the things I liked was your call to bring back all the military officers that have been purged by Obama. Former Army General Stanley McChrystal who was fired by Obama in 2010 would make an excellent choice as Trump’s running mate, but that may not be a good idea looking at the Electoral College map.

Schwab – This election 2016 may be the most important event in the history of the United States. There are distinct differences between the Hillary Clinton ideology of big government versus Donald Trump’s pragmatic, bi-partisan approach for problem solving as Americans rather than Republican or Democrat.

Buckley – About forty-years-ago, there was a novel that approached the Revolutionary War in a unique way. Up to that point it has been a libertarian story. The rebels were deeply disturbed by Britain’s occupation and fought them in a republican manner. This was a Machiavellian moment. It was like Florence where the Floridians needed virtue to defend itself. We are going through the same situation in this election year. We have no answers for the rise of Bernie Sanders. I don’t think of it as people crying out for socialism. It’s more like they are sick of Hillary. It also explains Donald Trump.

Schwab – Both Clinton’s and Trump’s unfavorable numbers are disheartening in their enormity. The voters are left to decide between the lesser of two evils or simply a protest vote.

Buckley – I think the unfavorable will come down sooner than later.

Schwab – The liberal media that adores Hillary Clinton is doing everything it can do to damage Trump. Many say it does nothing but strengthen Trump supporters, but there’s little research to suggest there is a backlash at this point among various ethnic groups traditionally Democrats or independents.

Buckley – Well, among establishment Republicans like Mitt Romney, they are frothing at the mouth over Trump’s pending nomination.

Schwab – I have been writing columns on Trump cabinet possibilities if he wins. Positions like attorney general, defense secretary, homeland security, etc.

Buckley – Tell me who you picked, I’ll look it up. You know what Cruz’s mistake was? He picked Fiorina, but he should have announced his cabinet. (Laughter)

Schwab – For attorney general I picked Trump’s former primary opponent New Jersey Gov. Chris Christie. An excellent runner-up would be Alabama Sen. Jeff Sessions. He is the only senator to date to openly endorse Trump.

Buckley – Yes, I know Jeff. He is superb. He might make a great secretary of state. His interest is foreign policy.

Schwab – I put down for defense secretary Ret. Army General Michael Flynn; another Obama casualty. Flynn is the former head of the Defense Intelligence Agency. He is known for his insightful and candid comments on Obama’s purge of America’s best military leaders. The second choice would be Rep. Duncan Hunter, member of the Marine Corps Reserve, three tours of duty in Iraq and member of the Armed Services Committee. And as a sidebar, he and Trump are good buddies through their career interest in real estate. Today I am doing commerce secretary, homeland security and treasury.

Buckley – You want to give me a head’s up on treasury?

Schwab – I have Carl Icahn.

Buckley – May I suggest another possibility? There is a man behind the scenes, Bob Luddy. He is a very solid conservative. By the way, he’d be a great choice for secretary of education. He established the Civitas Institute in Raleigh, NC as well as current CEO of CaptiveAire Systems. He is really on board with Trump and would make a great choice for education or commerce.

Buckley – Now education, Trump wants to blow that up. I have an idea about that. You go around them and provided the money straight to the states.

Schwab – Something has to happen with the educational system in this country. It is appalling how uninformed these kids are with their own country and basic life skills they will need to thrive in a capitalistic country. Let me ask you a few questions about your book. “The Way Back,” do you consider it a liberal interpretation of what this country needs to do? 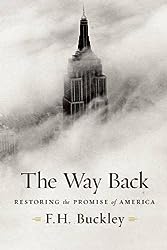 Buckley – I think labels such as liberals and conservatives, left or right are dissolving before our eyes. People do not have an understanding of what America is at this time. Cruz and Romney came out with a formula or ideological purity. I have never seen that work. It is a question of connecting with people. A Washington Times reporter told me that Trump’s secret is he shows compassion. Romney and Cruz may have had good intentions, but they surrounded themselves with the wrong kind of people.

I live in Washington and I am part of the legal community and know Cruz. He lives in a bubble and it’s an echo chamber much like New York is. Trump is not one of them. He relates to average Americans. He is the standard for a true American advocate.

Unlike all the other candidates, if he was sitting in a bistro in Paris and a sloppy-dressed, vulgar American passed by, he would not try to disavow himself from that person. It isn’t in his persona of what America means to him. My American has people like Muhammad Ali and Johnny Cash and Trump is part of that. He has no desire to be anything else. He doesn’t try to be cosmopolitan; he’s a great family guy. In the last 34-years, we have seen decline. There is a class society where some are doing very well while the rest of us are stagnating.

The people at the Wall Street Journal, bless their hearts, speak of growth. If the so-called growth is two percent of the people, that’s no good. We are an aristocracy. You have a bottom ten percent of fathers and sons and about the same in the top ten percent. In between, there is really no difference from the U.S. and Canada (Mr. Buckley is a Canadian native).

The differences are not just shocking, they’re surprising. This aristocracy is a complete failure of what once was called “The American Dream.” America was a caricature of Abraham Lincoln. He came from nowhere, only one year of college, yet became a lawyer, a voracious reader of the classics and philosophers and became one of the best educated presidents. His version of America was freedom for everyone to rise to their own level of abilities.

If you asked people in the 1950’s what their definition of America was, they’d say getting ahead. If Denmark and Canada get it, holy smokes, we should too and Trump definitely does. Trump’s portrayal of nationalism is actually pro-Americanism. That’s something that has been absent for a long time.

Schwab – In the book you say the Democrats won in 2012. The issue of income immobility was seized from its traditional Republican war cry. I always viewed Obama’s victory as a combination of the left wing media’s utter contempt for Mitt Romney and Romney’s poorly run campaign and its candidate. Am I wrong?

Buckley – Yep, Romney’s infamous 47 percent speech destroyed any chance he ever had to win. 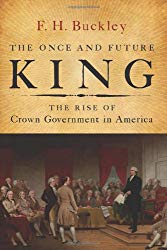 Buckley – The figure came from Arthur Brooks. Saying 47 percent was like saying I don’t want you. Obama should have lost. He partially won in 2008 due to the major recession and the fact that he would be the first black president. But in 2012, we had witnessed the weakest recovery from a recession in history, the Benghazi murders two months before the election, wide mistrust by the American people, etc.

I thought Clint Eastwood’s speech at the convention was spot on with the empty chair routine. It should have been a Republican year, but Romney spoke of political geometry, did not show compassion for people – what you had was all the wrong answers and didn’t even raise the right questions. They should have used Trump’s formula of compassion and the credible promise that the class inequality will be fixed.

Editor’s Note: Look for Part Two of this interview.