The Mool Mantra Is A Call to God. A prayer that has offered me solace and strength whenever I needed it. It originates from The Holy Guru Granth Sahibji, a Revered Scripture which is treated as The Living Guru as per The Sikh Community. I believe and know from experience that reciting and or listening to The Mool Mantra is an incredible experience. Don’t miss out, Try it! 🙂 – Listen to it here:

India reminds all of us of the wisdom and knowledge available to us since centuries and makes available to us not only solace but learning from its ancient texts. Some of that information is bound within our genes and passed down our lineages but some we need to re-learn for aren’t we all transcendental beings?

Let us walk the footsteps of The Guru by beginning a new quest when life achievement is measured only with how much we have learned and implemented and not how much we own in terms of material wealth or social status.

(Definition in Italics, permit mistakes if any and please correct me if I am wrong In order to adhere to specificity, I have used excerpts from Wikipedia after researching different sources and finding these similar to my understanding. This Article titled Mool Mantra is organized in the following way – The Mantra and then the English Translation followed by a verse written by me in context. Finally at the end of the Mool Mantra is my perception of it and what it personally means to me.)

English: One Universal Creator God, The Name Is Truth, Creative Being Personified, No Fear, No Hatred, Image Of The Timeless One, Beyond Birth, Self-Existent, By Guru’s Grace.

Ek Onkar – One God.
The one without form exists,
and its existence is not dependent upon our beliefs.

It does what it has to,
As per Natural Laws which Govern The Universe and Beyond.

Being Centered is Sat,
and validating Existence is Satya. 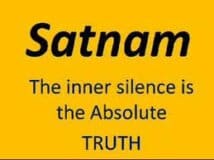 Who Am I
Is the question that I am trying to answer?

In Sanskrit, there are two words which have this root: Sat, which means being-ness or existence, and Satya, which means truth or validity There is a great difference between the two Satya is the quest of the philosopher who seeks truth What is this truth? It lies in the rules whereby two plus two always equals four, and never five or three – So Satya is a mathematical formula, a man-made calculation, but it is not Sat. It is logical truth but not existential reality. Sat is that which just is and always has been, Eternal God is both Sat and Satya, existence as well as truth. Being both, He can neither be fully attained through science, which probes truth, nor through art, which explores existence. Both are incomplete in their search, because they are directed only towards One Half of Him, where both meet! Where the mind and heart meet – religion begins! If the mind overpowers the heart, science is born and If the heart overpowers the mind, the realm of art is entered: poetry, music, song & sculpture are among the other examples of heart overpowering the mind. Science and Art are dualities ; religion is the synthesis.

Naam means, literally – The Name. A fuller definition of the word can only be found within the Sri Guru Granth Sahibji, Naam is Gods Word, or the Divine Essence. Etymologically, the word has a striking resemblance to the Greek neumena, or the Bright Essence, as opposed to phenomena Naam is not merely the “Name of God” as is commonly believed; it symbolises the Being of God embodying all Creation. Naam is also referred to as Shabad in the Shri Guru Granth Sahib.

This Essence/Naam /Shabad is formless, colorless, and featureless but, as said, is present in all creation. There is no plant, no creature, in which it is not present.
The physical dimensions of Reality (the outer shell) are always in flux; they keep changing. While birth, death, creation, destruction, etc occur in the physical dimensions of creation, the Essence, being Sat (Sat-Naam), never changes; it transcends space and time.

Karta Purukh – The Creator, The Doer

I do, but I dont, I don’t, but I do! Who is the doer, is it Me or Someone Else? Karta translates literally as the Doer, the Creator Purukh translates literally as Man. In the Sankhya system of Hindu philosophy, Purusha (the Universal Spirit), eternal, indestructible, all-pervasive, is without activity or attribute, and it is left to Prakriti (primal nature), itself an un-caused cause, and an ultimate principle, to bring the phenomenal world into being.

Nirbhau – Without Fear; Niether fear, Nor Hurt Can Shake my Roots. None can change all That I am?! Bhau translates as fear, and Nir translates as God is Without Fear: fear always involves the other, and such fear is possible only if there is another being besides Him (God). A corollary to this attribute, stated positively, is that God is all Bliss.

Nirvair – Niether Anger, Nor Enmity. A Clear Mind Is My Prized Possession for I am simply spontaneous And flow with myself Neither holding back, nor letting go. The task is done and my intent is no more. Vair translates as enmity or hostility, and Nir translates as Without. A corollary to this attribute, stated positively, is that God is all Love He is above all fear and is free from all thoughts of enmity.

Akal Murat – Being Beyond Time. Do I belong here or there? Do I belong in the past or the future? I simply belong in the Now and I exist here and now. This is my life and This is my death. Akaal translates as “not subject to time or death” and Moorat translates as form, shape, or image God is a Being beyond time: an eternal, indestructible Entity.

Ajooni – Beyond birth and death. If I am born, I must have died sometime. If I have died, I must be born sometime. Both are part of the same cycle and both interdependent to each other. Joon is a feminine noun and translates as birth or existence; the A- suggests ‘Beyond’ God is Uncreated, Beyond Incarnation: He Himself, being the Primal Being, no being prior to Him can be conceived.

Saibhan – Self-existent. I exist, Who is the I? It IS! Who is the it? Love is? Where is it? Saibhan is derived from the Sanskrit Word “swayambhu” and, as stated above, is translated as self-existent.

Guru Prasad – By the favor of the Guru. I dedicate this to my Gurus, who came to me in various ways and helped me evolve in this cycle of life. I am but their flute through whom the wind blows. Gur stands for Guru: Master, Spiritual Teacher & Guide. Prasad translates as favor, grace; thus He is attained by the Grace of the One Who Enlightens us. Now use the same verse while imagining it addressed to yourself and feel the miracle happen.

Ek Omkar – One Supreme Force
Sat Naam – Being Centered is Sat
Karta Purakh – Bound by Dharma
Nirbhau – Unafraid of anyone or anything
Nirvair – Neither anger or enmity affects me, my mind is clear and unclouded towards decisive action towards any adversity
Akal Murat – Omnipotent, Omniscient, Omnipresent Ajooni – Forever & Indestructible in Spirit
Ajooni – Beyond birth and death
Saibhan – Complete within myself
Guru Prasad – Blessed by The Supreme Force

Raj Sukheja Copyright 2017. This article is written and interpreted by me interspersed with original content from The Guru Granth Sahibji which is available through various online and offline platforms and libraries.