“Take my picture,” Lee says to Marina on a sunlit day at their Neely Street house.

I am still pained today by the slaying of John Kennedy in downtown Dallas, all those years ago. I began to study this case in earnest in the mid-1970s, when so many anomalies in the investigation could be observed. The ‘Luminosity of Truth’ is not always quite as clear as we would prefer. The backyard photos of Lee Oswald, taken casually by Marina on March 31st, 1963, have always been a great source of confusion in this case. The best explanation of these mysterious photos, that I have been able to find, is provided by Jack White, a photographic expert from Fort Worth. 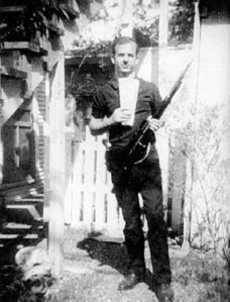 Fake: the Forged Photograph that Framed Lee Harvey Oswald is the video about the findings of Jack White (I will link his biography below). It was first broadcast in 1990 and was produced by Jim Marrs, an expert on the assassination of John F. Kennedy. I had recorded this ‘Special Report’ at that time, but now I have learned that it is available on the internet. I will explain just a few of the key points that were made in this convincing presentation, then I am relying on you, and your integrity as an American citizen, to watch and to study this video for yourself (I will link it below).

When questioned by Captain Will Fritz, and shown the incriminating backyard photo, Lee said that it was a fake, and that his head was pasted on to someone else’s body, in order to frame him up for the killing of the President. Supposedly, two photos and one negative were found at Ruth Paine’s house in Irving. Most puzzling though, is the fact that detective Gus Rose of the Dallas Police Department says he found two negatives. Another mysterious tidbit is that the dark shirt and pants that Lee wore at the photo-shoot were never retrieved from the Ruth Paine home?

In 1976 a third photo was found at the home of the widow of Roscoe White, a shadowy Dallas policeman who may have been involved with the assassination conspiracy. His story is more revealed in a second video; The Many Faces of Lee Harvey Oswald, which I will link below also. Moreover, Jim Marrs interviewed Robert and Pat Hester, who are dead now, but they had worked in a photographic lab (I do not know the exact connection of the lab to the assassination). They were shown the photos by the FBI on the night of the assassination, one day before they were supposedly discovered at Ruth Paine’s home. One shot was just of the background with the staircase at the famous Neely house (I have visited it before). Lee wasn’t in the picture!

In 1967 another photo emerged from some stored possessions of George de Mohrenchildt’s, a friend of Oswald’s with CIA connections. This was a higher quality photo, that seemed to have been taken with a higher quality camera. It had a black border, which indicates, according to Jack White, that it was taken from the negative, which was lost very early on in the investigation. On the back of the photo the words “Hunter of Fascists Ha Ha Ha” is written. Both Lee and Marina have been eliminated by handwriting experts as the writers of this odd slogan.

Some serious problems exist with these photos (Warren Exhibits 133 A, 133 B, and 133 C), as clarified in Fake. In 133 A, the famous Life Magazine photo, no one has ever been able to duplicate the hand gripping of the rifle, as Lee did. Also, the right shoulder slumps, as you can clearly see. These are signs of sloppy touch up work. Most troublesome, is the fact that there are no fingernails on the right hand, the hand holding the leftist newspaper The Militant. Puzzling also, is the fact that shadows fall in different positions, even though the snapshots were taken very close together in time.

There are many other riddles and people should take a look at all of them closely. I will just tell you of a few of them, then I am sure your curiosity will sweep you off your feet, and you will put a magnifying glass down on this pristine image. The wristwatch seen on Oswald’s left arm in 133 B was never retrieved. How could this be? The Imperial Reflex Camera of Oswald, purportedly used by Marina to take the photos, was not found until December 8th, by Lee’s brother Robert. Why was this?

The rifle size is too big for Lee’s body. The Warren Commission tried to cover this up by publishing a later ad of the rifle. The rifle in the National Archives is 40 inches in length. The rifle ordered by Lee was a 36 inch rifle. Also, in the photo the rear end of the telescopic scope is missing? More evidence of doctoring, I will suggest.

The most fascinating facts for me, are the evidence regarding the face. The face in this picture shows a flat chin, yet it is known fact that Oswald had a sharp, cleft chin. Jack White detected water spots on the negative. You can just about see the line where the face has been pasted onto the torso. White conducted a test where he placed a red transparency of 133 B over a blue transparency of 133 A. The faces exactly lined up. This is impossible, if they were two unique photographs? Therefore, the same head was grafted onto the two photos.

The neck (in 133 A and B) is very much thicker than Oswald’s real neck. He was known to have a 14 1/2 inch collar; however, the person in this image has a 16 inch collar, a 1 1/2 inch difference. This is clearly not Lee’s body! Jack White is certain that the background used was the same building block to create the various composites. Clever cropping and tilting of the easel were used to project the illusion of different shots. Please look for these details when you watch the video. He proves that the same background was used. It is an impossibility for the camera to be in the exact same position, unless a tripod had been employed.

The two official investigations of the backyard photos were both rather shallow. The Warren Commission tried to do a reenactment of the scene, and left the head off in their print published in the Warren Report! Why did they do this? Their main proof that the photos are genuine, is that the markings on the negatives were legitimately from the Imperial Reflex Camera. But White figured out how the conspirators pulled this off! They first built the composite in a sophisticated laboratory using a much better camera, then they photographed the photograph with the Imperial Reflex Camera, so that the negative would have matching forensics to the camera! 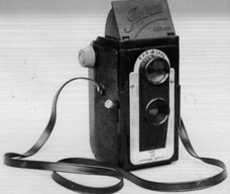 The House Select Committee on Assassinations, the second major investigatory body, conducted Pinrose Distance Statistics, where they would compare body measurements of known Oswald photos with the controversial shots of Lee in these suspicious poses. However, in their final report, they left out important statistical data, that did not jive. The essential chin measurements would have spoiled their report, so they were omitted!

Jack White was able to account for the fact that one face has a frown and one a smile, by the use of touchup, just on the lips. Everything else in the face is identical, an impossibility, when you consider all of the muscles in your face! Mister White actually models these scientific facial characteristics, by mimicking a smile and a frown in the video!

And so there you have it, a clever forgery was pulled off by using graphics blenders in some sophisticated facility. Jack White has unveiled this forgery very convincingly, from what I can tell, and the implication of this is indeed chilly … indeed most nefarious. A conspiracy to frame Lee Oswald as the sole shooter of John Kennedy was concocted, and the infamous backyard photos were an integral part of this plot. Jim Marrs thanks Jack White for his groundbreaking work at the end of the video, and urges citizens to look beyond the government experts for the truth.

I fear that very few Americans even know anything about this clever fabrication of these images of Oswald; it truly looks like they were manipulated in a photographic lab of a very high caliber. I hope that my humble article will reach a great amount of people, and that they will begin to view this video in numbers; it contains razor-sharp explanations for these enigmas of the camera, this flagrant trickery that fooled ‘We the People’. Most certainly they then will come to the same conclusions that I have come to: that President Kennedy was slain on the ‘Streets of Dallas’ by a cache of vengeful powerbrokers (Right Wing Extremists) who found it a necessity to rid themselves of a liberal JFK, and his progressive policies, that really transformed our country and put it on a better path.

REQUIRED VIEWING FOR ALL AMERICANS!

The Many Faces Of Lee Harvey Oswald

“Inquiry is the life blood of truth, and the careful report of inquiry is the newspaperman’s cross and grail.”

P.S. I have not been able to locate any convincing rebuttal to Jack White’s perfect presentation on the internet. It’s that solid, that air-tight; the absolute TRUTH about the BACKYARD PHOTOS is revealed!