Next Day Air is a throwback which brings to mind the mediocre Blaxploitation Era flicks from the 1970s. But where most of those low-budget productions were merely poorly-scripted, sloppily-edited, take-the-money-and-run rip-offs, this homage to that best-forgotten genre is actually a well executed, comic crime caper.

The movie marks the directorial debut of Benny Boom, the veteran purveyor of gangsta’ rap famous for making music videos for everyone from Snoop Dogg to 50 Cent to Nas to Nelly to Busta Rhymes. Here, he makes a remarkably smooth transition to the big screen with the help of a talented ensemble capable of breathing life into his host of colorful characters.

The story opens in Philadelphia where we meet a couple of drivers for an overnight delivery service, “Employee of the Month” Eric (Mos Def) and his hapless counterpart, Leo (Donald Faison). The former doesn’t deserve the accolade since he wastes too much company time getting high and chasing a pretty colleague (Lauren London) around the office. The latter, meanwhile, is an equally-lazy loser who’s on the verge of getting fired by his own mother (Debbie Allen), the manager of Next Day Air.

Lollygagging Leo is known to smoke weed behind the wheel and to slow his truck to a crawl to flirt with the ladies. This helps explains how, one fateful day, he accidentally delivers a box from Mexico he has no idea is filled with 10 kilos of cocaine to the wrong apartment. He leaves the package in the hands of Brody (Mike Epps) and Guch (Wood Harris), small-time crooks who think they’ve died and gone to heaven when they open it up. Figuring the solid bricks have a street value in the six-figures, they start making plans to retire by selling it in one fell swoop to a local dealer (Omari Hardwick) with a very menacing henchman (Darius McCrary). 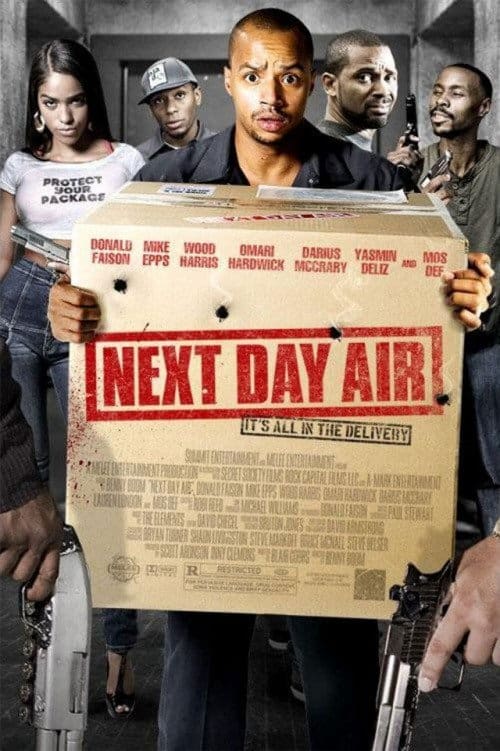 What Brody and Guch don’t know, however, is that the coke was meant for Jesus (Cisco Reyes), the henpecked Latino who lives just down the hall with his loudmouthed girlfriend Chita (Yasmin Deliz). The unassuming neighbor happens to be a gangsta’ with an international cartel run by Bodega (Emilio Rivera), a ruthless mobster already on his way to America with guns and a goon (Lobo Sebastian) and determined to retrieve his contraband come hell or high water.

Taking no prisoners, Bodega retraces the path of his errant parcel, embroiling all of the above in a high body-count affair that’s every bit as funny as it is bloody. Brace yourself for a raunchy brand of humor and for gratuitous gore that can get fairly gruesome.

A screwball comedy/splatter flick which might best thought of as a CAMPY cross of Cotton Comes to Harlem and No Country for Old Men.