The Standing Rock Sioux Tribe are ready to fight President Trump over the DAPL (Dakota Access Pipeline), which this story below details below, explaining both sides of the controversial issue, as reported by Bruce Edwin from Hollywood Sentinel dot com.

President Trump has been a busy man since he took office last week Friday. Today, he issued more Executive Orders, as well as yesterday. Wednesday’s concerned Building the Wall at the border to keep out illegal Mexican immigrants. Also there were actions to make it easier to kick out illegal immigrants already here, particularly those with criminal records. The directive also allowed for caution in treating children of immigrants humanely, and being cautious to help prevent child abuse or child trafficking.

According to the Federation of American Scientists, UAC’s (illegal immigrants who are unaccompanied children) are on the increase into America, with nearly 60,000 caught at the border last year in 2016, with 20% of those children Mexican. Mexican UAC’s declined last year, who were formerly at around 60% years earlier.

Trump also sent an official message to the City of Chicago, that unless they crack down on gang violence and deaths there, that he would be bringing in the Federal Government to do the job. Read my report on Chicago later this week, with advice to the President regarding my former hometown.

On Tuesday, Trump issued several directives including reversing the cessation of the DAPL build. Trump did indicate that he was calling for specific investigations regarding the pipeline in the Sioux Tribe disputed area, indicating he would follow constitutional law regarding this matter. Regardless of what happens, Sioux Tribe leaders are surprised – though they shouldn’t have been, and understandably – upset.

The Sioux Tribe states, “Yesterday we received devastating news of Trump’s intention to resume construction of the Dakota Access Pipeline, issued via executive memo.” They continue, “ His decision violates tribal treaties, poses grave environmental risks, and blatantly disrespects all those who fought so hard in the #noDAPL battle.” They add, “We will be taking legal action, and we need your help.”

The Sioux tribe adds, “The Environmental Impact Statement is still on-going. By leaving your comment, it will help us compound our claim that the pipeline poses grave environmental risks. Do not allow the Department of the Army to withdraw the Notice of Intent to prepare an EIS as President Trump suggests in his memo. Please click here and show that you #StandWithStandingRock.” My phone call to the publicist for the Sioux Tribe today has not yet been returned. 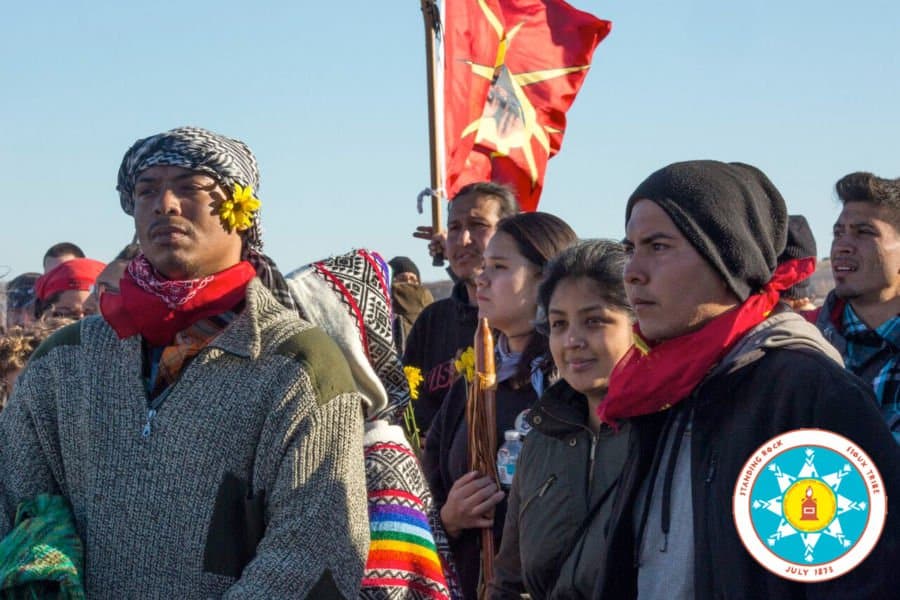 Opponents of the DAPL Argue that:


1, White Invaders Stole America from the Native Americans – now they are trying to do it again.
a, The U.S. Government has given back a tiny portion of the land to Native Tribes, a tiny token of what they deserve and can never be repaid for the theft, rape, pillage, and massacre
b, The government again began buying / stealing these token land grants back, and leaving Native Americans with only tiny areas called reservations-that itself is not acceptable
c, The government is now attempting to infringe on the rights of these Native American Reservations
2, The path of DAPL is through sovereign land
3, The land of the Native Americans is sacred, and houses their ancestors-all a part of their religious worship and religious freedom
4, DAPL is dirty fuel, that will contribute to the destruction of the environment of many
5, DAPL backers are killing cattle owned by the Native Americans
6, Police are violating the constitutional rights of peaceful protesters, firing at them and journalists with rubber bullets, freezing water, and illegally removing peaceful protesters from tribal lands
7, At least one city near the reservations did not want the pipeline near them, and the DAPL reportedly took heed, but-the tribes argue, are not giving the same respect to the tribes
8, DAPL got away with EPA oversight and regulation, by covertly treating the pipeline build as numerous small construction projects, rather than the massive one it really is
9, Water contamination is a valid risk, as the pipeline could reportedly leak and threaten the water supply of the tribes
10, The Army Core of Engineers, a civilian and military branch of the U.S. army was reportedly accused in 2011 of accepting “cost projections from land developer KBR, in a no-bid, noncompetitive, contract.” After high ranking Army Core member “Bunny” Greenhouse complained about this act, she was reportedly demoted from her Senior Executive Service position, stripped of her top secret security clearance, and-according to Greenhouse, had her office booby-trapped with a trip-wire from which she sustained a knee injury. A U.S. District court reportedly awarded Greenhouse $970,000 in full restitution of lost wages, compensatory damages, and attorney fees, according to Wikipedia. Possible corruption is occurring with the Army Core related to DAPL, protesters argue.

Defenders of the DAPL state:

1, Crude oil reportedly accounts for just 6% disasters within pipeline issues
2, The tribes sold the land to to the government that they want to lay pipes on – years ago, for over 5 million dollars, and have no rights to the land anymore (tribes argue they still have a legal say in the land per earlier agreements)
3, America needs to get off reliance on foreign oil, and this will help America
4, DAPL offered the tribes millions of dollars for some of their land, but they refused, so they said they bought land near them instead
5, protesters have been trespassing on land now bought and owned by DAPL, and damaging their equipment and committing acts of vandalism
6, America needs energy to survive, and function as a country
7, Army Core made amends, and does a lot of good for the environment, are following the law, and doing their job
8, The CEO of DAPL has put money towards conservation, cares for the environment, and is not violating rights or the law
9, America needs the pipeline to make fuel more plentiful for energy, and less expensive for Americans

I suggest with my office that the Sioux Tribe produce the documents proving they own the land that DAPL wants to build on which the Sioux Tribe claim domain over. Publish the documents for the world to see. We live in a time of transparency where truth is essential to freedom and effective dealings of power. If the lands were sold by the tribe without coercion, as DAPL argue, then reach a fair agreement for safety and handle any other compensation for potential safety threat possible, and carry on. If the lands were not sold, and should be under control of The Tribe, then the people of America will back you.

In other news, Secret Service agent Kerry O’Grady may be getting fired for reportedly saying that she would not take a bullet for the President, and insulting his administration allegedly on her FaceBook page. Secret Service agents must have total allegiance to defending the president’s life. To state or do otherwise demands one be fired.

My next column here will include reports on the solution to reduce murders in Chicago, as well as bullying of the Trump family. Be sure to also check out more in entertainment news at my site Hollywood Sentinel, with that link here below.