Starting on June 21, Sikh Youth of America will organize the “First National Sikh Blood Drive” to help overcome the blood shortage faced by the nation. In order to achieve this goal they have joined hands with various blood collection agencies including American Red Cross and Blood Centers of America.

Sikh Youth of America is a nonprofit organization that has been working with young Sikhs to help them develop leadership skills for the past 25 years.

The blood drives will be held at several locations in various states including California, Texas, New Jersey, New York, Michigan, Massachusetts and Indiana. “This is a great example of the Sikh spirit of serving others in time of need,” said Jasjeet Singh, a prominent member of the Fremont Sikh community. “We have always thought of ourselves as an integral part of America and have eagerly stepped forward whenever the nation has needed us to do so,” he emphasized.

“We have held several blood drives at individual locations before too,” said Harjot Singh Khalsa, President of the Gurdwara (Sikh place of worship) in Fremont, CA. “However, we decided to make it a coordinated nationwide effort this year, after receiving calls from various blood agencies about the shortfall in blood donation,” he said.

“Sikhs will be donating their blood to honor Guru Arjan Dev Ji, who was tortured and killed after refusing to convert to Islam in 1606 in Punjab, India,” said Harsimran Singh, leader of Sikh Youth of America, from Central Valley, CA. “Along with honoring Guru Arjan Dev Ji, we will also be remembering those who gave their lives in the struggle for a free Sikh homeland,” added Sandeep Singh of Modesto. Central Valley Sikhs have scheduled two blood drives, one in Stockton, CA and the other in Modesto, CA and are hoping to add two more in July in Sacramento, CA and Livingston, CA. 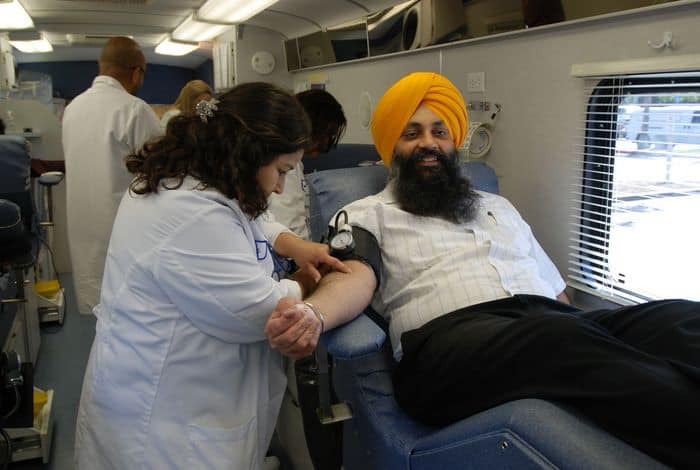 Satnam Singh Khalsa, Secretary of the Fremont Gurdwara, explained that by going nationwide, they want to raise awareness among other Americans about Sikhs and their way of life. He wants to encourage members of other communities to join Sikhs in this blood drive. “If nothing else we all will lose some weight by donating blood,” he joked.

During the blood drive, each of the locations will also be serving “Langar” (free food) and will have a “Shabeel” (stand with free cold drinks) for all the visitors and participants of the blood drive.

Sikh Youth of America, a non-profit organization that works with young Sikhs to help them develop leadership skills, is already working on the second phase of the drive.

The main event of second phase is planned to be held in Yuba City, California, where thousands of Sikhs gather in November for the Annual Sikh Parade. “We want to hold the biggest ever California blood drive that day,” said Nirpal Singh, President of Sikh Youth of America for Bay Area.

Sikhs have been living in the United States for over a century now and have contributed greatly to American prosperity. Sikhs have served in both world wars and more recently in Iraq and Afghanistan as part of the U.S. armed forces. However, Sikhs have often been targets of racial abuse and violence in the post 9/11 era, due to their unshorn hair and turbans.