20,000 to 40,000 years ago, depending on who you are talking with, trinkets were attached to a band and worn by humans. Some sources say beads began as seeds during the period of the Great Apes.

Archeologists have found the need for a bead stretches further back than to the first human ancestor erectus who walked upright. Possibly by locking knees – a different foramen magnum (hole in the skull) became available where today the spine enters). That futuristic jewelry loving crowd may even have been early users of fire to cook their meat.

Bead history is so closely related to humankind it is impossible to chronicle one without the other. 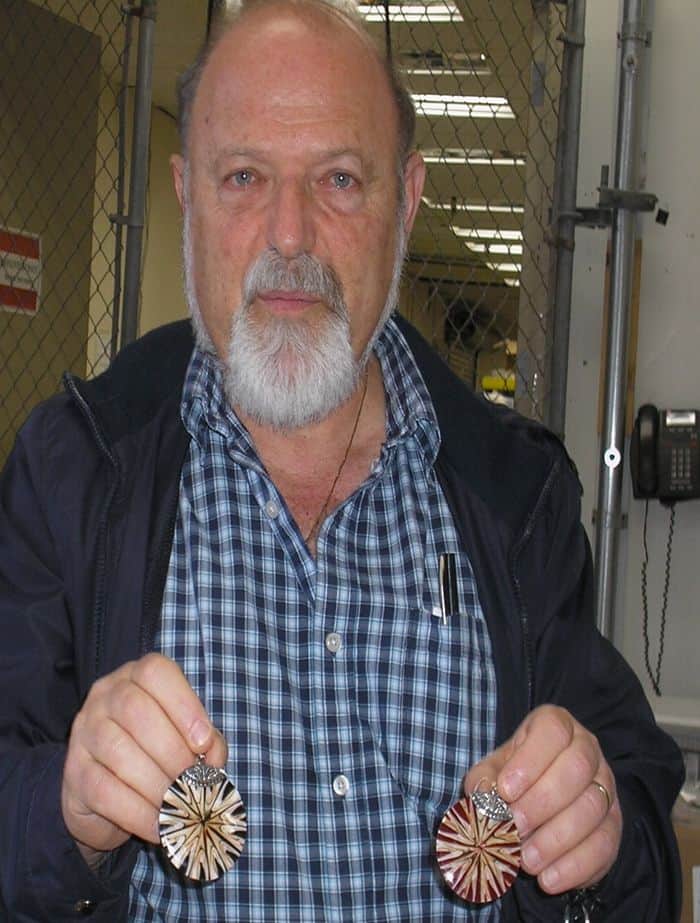 Every society has invented some basic method of making and wearing beads. Whether using plant seeds, stones, dried weeds, or amber-oozing from tree bark, if we can get it we’ll wear it. One lust for beads is the ease of having one, or more. By contrast, making trinkets from gems, semiprecious stones, bones, and rocks is far more labor intensive.

Beads serve us as prayer objects, icons for protection, worry relievers (popular with Native Americans, are small worry stones). Then there are the money beads believed to bring prosperity if carried daily, and of course the lion’s share, those lollies that adorn people just to satisfy vanity. We share them by hanging them on our pets, make them into doorway decoration, window shades, rearview car mirrors.

Bead use lists are too long to relate.

Glass seed beads known as ‘trade beads’ were important substitutes for English coins during the colonization of North America. Columbus’ first trades with indigenous Indians were made with strings of beads and red hats.

Indians made beads of bird feathers, woodland bark chips, and porcupine quill beads decorated shoes. Other cultures relied on shiny rocks, bone, blue-green turquoise, and polished shells. These were distributed throughout western regions of the new land, northern Mexico. Florida coast shell beads made in Illinois were distributed to the agricultural societies of Mississippi, Ohio and the River valleys 1100 A.D. Roll your calendar forward a few centuries and there you today find sun, the South Sun bead empire – American “Corporate Gold.”

When you walk into a shoe store you expect to be able to find several pairs of decent shoes. Few drive to Liquor Barn for wine-in-a-box, you expect a couple nice grape offerings. So when I entered South Sun I expected beads more than jewelry made of beads. But the beads, not just beads, beadddddds as in bead paradise. Yes, there one is surrounded by trinkets popular since the dawn of cave dwellers, an incredible display of jewelry however…

South Sun is the Pacific Ocean of beads, as far as the eye can see, beads, beads in volume beyond what one can dream of. I could not imagine that the entire world we live in today includes so many varieties, colors, types, kinds, sizes, or materials, all comprising beads.

What was most startling was wrapping one’s mind around the fact beads are today such big business, enormous in dollar trade. And flipping price tags as I went, this place knew how to move beads.

Headquartered in a large retail industrial building, South Sun encompasses the entire corner across from a popular city airport. Past business experience pretty well verified that SS knew its product, beads. The organization has grown to towering heights under the guidance of owner Shlomo Gruer.

You would not have recognized the man approaching you as he extended a fan of Calfiornia Lottery tickets, offering, “Pick one” as the head Captian of this ship.

As I did, visions of California shelling out $68,000.000 started dancing in my head. I commented, “If I win you never have to work again.” Shlomo as he’s known vetoed the grand gesture, replacing it with his own, “Just have a great party for my employees.”

All he wanted, was more for his employees.

Employees matter… Those, mere employees. What is corporate America coming to? Shlomo’s concern for those around him explains a big part of South Sun’s success and its daily pleasant atmosphere.

As a young man, Shlomo began his travels with the jacket he wore and $100. Luck, and his attitude soon brought him a mate in the form of the wife who has been his right hand for many years. He attributes her hard work and guidance to South Sun’s enormous business successes.

Although fairly cheap today, diamonds still can never measure up to the brilliant light-catching glow of beautiful crystal jewelry. South Sun had along with it’s almost endless jewelry assembling choices, a supply of gleam-to-the-point-of-glowing Swarovski crystal.

He’s working tirelessly to bring thrilling imports from ever more countries, adding to Bali, Bangkok, and China sources. It can be no surprise that South Sun also has a showroom in New York on 5th Ave.

With so much on his plate what does the king of beads do for relaxation? He decorates, designing ever new superb art works of beauty.

And just when this place seemed it couldn’t get better, employees bring their household pet to work with them. Shlomo says, “Left behind owners worry about their pet and the pet misses it’s person. This way everybody’s happy”

I ask, can you think of any place you’re rather be?