NewsBlaze News
Home USA National Ruby and Oswald: Rendezvous at the Lucas B & B!

Did Jack Ruby and Lee Oswald know each other? Did they ever meet? I believe that they did know each other. Some testimony points to at least two meetings. One was at the Carousel Club on October 4th and the other was at the Lucas B & B in the Oak Lawn district of Dallas, in the wee hours of November 22nd.

In February of 2007 I visited Dallas on business and just on a whim drove by the location of the Lucas B & B. All that remains now is just an electric sign, the sign is still intact, but the notorious eatery itself has long ago closed its doors. This electric sign, with its glowing neon lettering, acted as a magnet to attract business off of the street.

A wave of emotion came over me as I took a few photographs of the sign; this was just an exercise in preservation of an important historic site. Moreover, many memories flooded back into my mind as recalled my ‘reckless days’ (the ‘Diaper Days of Dallas’) when we would eat at the Lucas B & B, after a wild night out on the town. 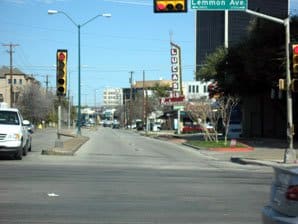 In the late 60s, early 70s, lots of people would rendezvous at this eatery after visiting clubs to hear their favorite bands, or after going to the New American Cinema (an underground cinema house that showed ‘art films’). Most of the patrons were in ‘altered states of mind’ and just wanted to grab a bite to eat and visit with friends, or chat with the zany waitresses that were employed by the Lucas B & B.

I had often heard rumors before of these activities (both humorous and nefarious), but it was not until the late 80s before I attempted to absorb details about the small role played by this Dallas landmark in the assassination of President Kennedy. Just last week, after looking over my photos of the attractive electric sign, I began to collect this data (below) and I thought you might like to see some traces of it.

Just as a warning, you should access primary sources as much as possible, please read the exact testimony, or look at the actual Warren Exhibits for yourself. This type of research can be taxing, but it is essential if you want to know what really happened. As you start to examine this evidence, you will begin to doubt, I’m convinced that Lee Harvey Oswald acted alone. There are just too many shreds, too many loose ends that will point you in a different direction. So here we go.

Wynn Warner was a musician who had first met Jack Ruby at the Lucas B & B sometime in 1958. He found Jack to be a likeable guy and saw him casually on three or four occasions. One time he went to the Vegas Club to hear a band.

Wynn observed that Ruby was quick in his attempts to ascertain information about him, but was ‘close mouthed’ about himself and his past. Warner also commented that he thought Ruby was a religious man, and frequented the Synagogue, especially after his father died.

While Warner was watching television, he was shocked to learn that it was Ruby who shot Oswald. Warner ascribed his motive to be that of ‘losing all that he had already accomplished during his Dallas days.’ Now his business would not be able to attract customers, because of the tarnished image that Dallas would have. 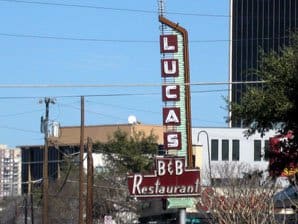 The final paragraph in the Commission Exhibit (No. 1484) is surprising. Warner “described Ruby as an aggressive type individual who was somewhat demanding and also one with very strong feelings.” He remembered how Jack would question him for data, but like he had said before, was tight-lipped about his own background.

Furthermore, Warner divulged that “in retrospect he considered that Ruby was possibly an individual with a split personality.” It seemed to him as if Ruby was thinking about something else whenever you were talking to him. I suspect that Jack had quite a lot on his mind.

Gloria Fillmon was employed as a ‘champagne girl’ at the Carousel Club. Late on Wednesday, November 20th Ruby offered to take her home after the club closed. They stopped by the Vegas Club on Oak Lawn Avenue and picked up Larry (probably Larry Crafard), another employee of Ruby. They then got a bite to eat at the Lucas B & B, at around 3 AM. Fillmon said that Ruby “talked to several people unknown to her.” (CE No, 2379)

Gloria Fillmon was uncertain of the exact date of this Lucas B & B visit. Others have said it was a day later, say at 2:30 AM on the 22nd. Gloria did say it was a day or two before the assassination. By overlooking this possible simple error, one can clearly see that her testimony synchs with the waitress Mary Lawrence. On the other hand, Mary never mentioned the presence of Gloria and Larry, so maybe it was on the 20th.

Pete Lucas was the owner of the restaurant at 3520 Oak Lawn. He did not like Jack Ruby one single bit and banned him from visiting his establishment. Pete also doubted the account of Mary Lawrence and said she is “considered to be a chronic liar and tends to fabricate stories in idle conversation.” I have not tracked down the exact Commission Exhibit for Pete Lucas yet, but know that it exists, and will take a look at it (from a memo of D.E. Boyd-Dallas detective).

A man walks into the Lucas B & B at 1:30 AM (11/22/’63) and sits down at a table. About an hour goes by, then Jack Ruby comes into the B & B, looks at the young man, then takes a table behind the cash register. Jack says he did not feel good, so just orders a large glass of orange juice. A few minutes later, the young man sits down with Ruby. Afterwards, Ruby pays the tab for himself and the young man, who has actually eaten a meal.

Mary Lawrence, the Lucas B & B waitress, thought that, after Oswald was arrested, she recognized this man as the same individual who had dined with Ruby earlier that morning. The night shift cashier had agreed with her identification. Mary told the FBI “that he appeared very similar to Lee Harvey Oswald.” She described him as a man “in his 20’s, 5’7″-9,” medium build, 140 lbs.,” with “dark hair.” This is a close description of the real Oswald (Contract on America-by David E. Scheim-p. 264-note: the actual Commission document is 223).

Mary’s account to the Dallas Police approximated the one she gave to the FBI. She also reiterated her point that the man had a “small scar near his mouth, either on the right or left side.” Oswald had no such scar. But Mary positively identified Lee as the man who had met with Ruby at the eatery. She then seemed to back off somewhat, some doubt was expressed, possibly after being pressured by her interrogators.

On December 3, 1963, two days before her FBI interview, Mary got a call from an unknown male. It was a threatening call, “If you don’t want to die, you better get out of town.” Somebody wanted Lawrence to button up her lip (ibid p. 264).

Well, that is mainly all of it. True, a shadow of doubt has been cast on Mary’s story. Marina had seen him awake at 12:30 AM at Ruth Paine’s house. This is one hour before he purportedly entered the B & B. Also true, the next morning Wesley Frazier had driven Lee to work to the Depository Building. So maybe Mary was lying, just as the owner, Pete Lucas, had stated. Yet the cashier had corroborated Mary Lawrence’s story.

On the other hand, a Dallas attorney, Carroll Jarnagin, had positively identified Lee Oswald as meeting with Ruby at the Carousel Club on October 4th. Two of Ruby’s best strippers, Jada and Beverly Oliver, also recall seeing those two together that night. Jada died under mysterious circumstances, but Beverly Oliver has told her account for The Men Who Killed Kennedy.

A cold chill came over me at the time (2/20/2007 1:30 PM) that I drove past the former site of the Lucas B & B. My earlier days in Dallas would resurface with some misgivings, with the kind of consternation associated with untimely events. I could picture Jack Ruby sitting in the restaurant, eating his breakfast, drinking his coffee and talking a million miles an hour with a shady party. He must have been ironing out the details of how this whole thing could come off without a hitch.