We just met a nun who knows the answer to a very old question, a question many people have asked over the centuries. “Why did Moses wander in the wilderness for 40 years?”

When a friend from Australia came to see us last weekend, there was a special place we wanted to take him – the Stage Nine Theater in Historic Folsom. We all had a wonderful time.

None of us expected to see nuns do more than glide through the hallways. Sally always thought they wore sneakers and rollerblades. Unlike some of the nuns she met previously, these nuns have wonderful singing voices, a pleasure to hear. 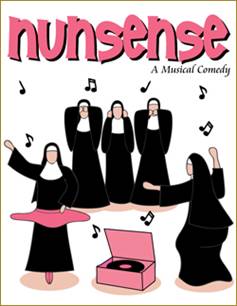 Nunsense is a hilarious experience – and definitely Habit Forming. A real audience participation show, with the stage extending all the way out through the audience, to the front door and you’ll be amazed to see what happens to Mother Superior

Sister Mary Regina, Mother Superior of the Little Sisters of Hoboken, is originally from the small county of Kilquirky in Ireland. Before becoming a nun, she was known as Mary Young and recently retired from McClatchy High School after 30 years in the district.

Sister Mary Robert Anne was a child of a disadvantaged Brook-

lyn family and you can tell that by her accent. After dropping out of Cashier School, Reverend Mother took pity on poor little Erica Wilens and accepted her into the order, even though some of her language is unprintable.

Sister Mary Amnesia, a lost soul, arrived at the convent without a clue as to her identity, recalling only that a crucifix fell on her head. Apparently, she resembles Jessica Larrick, who recently learned ventriloquism. If Sister Amnesia could remember, she would want to thank her family and friends for their love and support.

Sister Mary Leo came to the order from an Illinois farm. Her life’s dream is to become the first “nun ballerina” and her name may be from her “leotard,” – or is it something more sinister? Formerly known as Erica James, a dancer and actress, this novice has much to learn.

Director Bob Baxter says he is “very proud to work with these women. They all create full, hilarious characters that take author Dan Goggin’s material and bring it to life. I love this show; it is light, fun and incredibly funny. It’s a show that Catholics and non-Catholics can have fun with and it’s a great night of ‘forget your troubles’ theatre.”

Stage Nine Theater and Runaway Stage Productions present Nunsense, from August 15, through to September 21, but don’t wait until the end to see it!

And as for the ancient question, why did Moses wander in the wilderness for 40 years – we’ve been sworn to silence – so you’ll need to listen closely in the second act.

For more information about Stage Nine Theater in Folsom, see their website: