Folsom area residents and commuters welcomed the opening of the Folsom Lake Crossing bridge on Saturday, to a fanfare from Folsom High School Marching Band and upbeat speeches.

By my estimate, more than 10,000 people attended, and in the festival atmosphere, everyone was in a positive mood, pleased to see the bridge open. The vistas from the bridge were a wonderful sight to behold.

A local group, seeking to show their gratitude not only for the bridge, but for life, health and happiness, brought their “Gratitude Attitude” and spread it around to all in attendance. Local artist, Julie Bjorgum and local businessman Jeff Marmins concieved the idea and promoted it using social media, Marmins’ specialty.

Speeches praised true bipartisan cooperation and the efforts of many, all working together, to build this bridge in record time, a bridge that gives the Folsom area back its life, and makes the lives of commuters easier and more scenic.

Using his skateboard to good advantage, John, a young Folsom resident was pleased to be the first to cross the bridge after the official opening ceremony.

Thanks go to the “Dam Road Closed Band” for their entertainment and local vendors for the food – which ran out early because there were so many people – and thanks to local groups for making the exhibits fun. 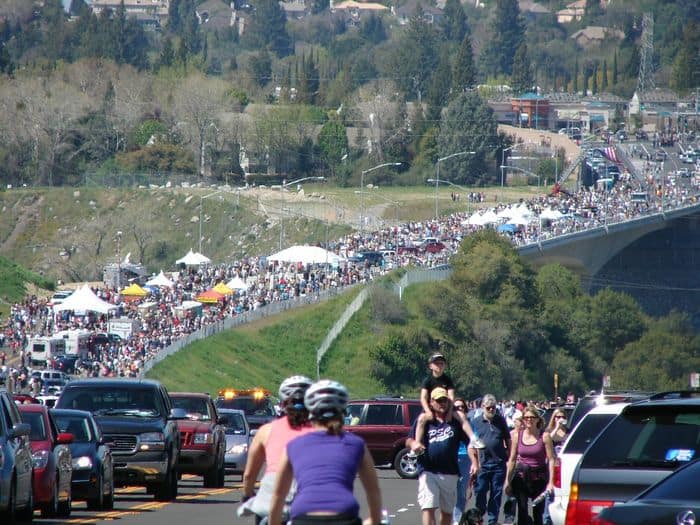