You all know the story of the captain who ran his giant cruise ship on the rocks at the small Italian island of Giglio.

He promptly jumped ship, claiming, according to some reports, that he “fell” off and couldn’t get back on board, despite orders from the authorities.

During the past 24 hours it was pulled upright and you can watch the rest of the operation live courtesy of UK’s newspaper The Telegraph.

The process of righting the ship was very slow but you will still see some working being done and scans of the side of the ship show the damage to the area which was previously under water.

It is easy to see the waterline of dirty water.

Two or more bodies have never been recovered.

32 people died in the “accident” and the captain, some of the crew, and one company official were arrested.

So far those convicted got extremely light sentences, the worst will probably result in some house arrest.

Concordia is a division of Carnival Cruise Lines.

Cruise ships are usually licensed in countries with extremely lenient liability laws. Some even honor the contracts which cruise goers routinely sign but seldom read – most of these contracts give up all rights to sue for any reason. 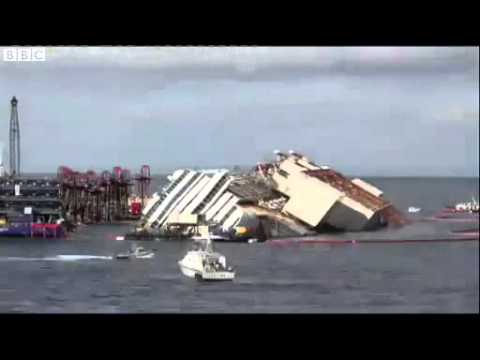