Donald Trump officially takes office as President of the United States tomorrow. He will share in the official, traditional tea ceremony with Obama and family tomorrow morning, before other formalities get underway. Breakfast burrito not included.

Tehran, Iran has suffered its first disaster of the year. Their 17 story Plasco building has burned to the ground, reportedly killing at least 30. Iran is also reportedly worried now that Trump takes office tomorrow Friday, concerned that he will reinstate sanctions against the Muslim country.

Hello! Welcome to the 3rd edition of “Breaking News with Bruce Edwin” found only here at NewsBlaze! As publisher of Hollywood Sentinel dot com (link below), which reports only the good news, I report U.S. and world news, more frequently than the weekly issue of Hollywood Sentinel.

The Broad’s popular Un-Private Collection art talk series resumes next week, at The Theatre at Ace Hotel in downtown Los Angeles with a conversation with L.A. artist Thomas Houseago and rock bassist of the Red Hot Chili Peppers and art collector Flea. Houseago’s 15-foot tall sculpture Giant Figure (Cyclops) from the Broad collection is on view now as part of the installation Creature. At this one-night event, the pair will discuss Houseago’s inspirations and practice, and the impact that visual art and music can have on each other. This program has limited tickets which may be purchased online at the Broad website. 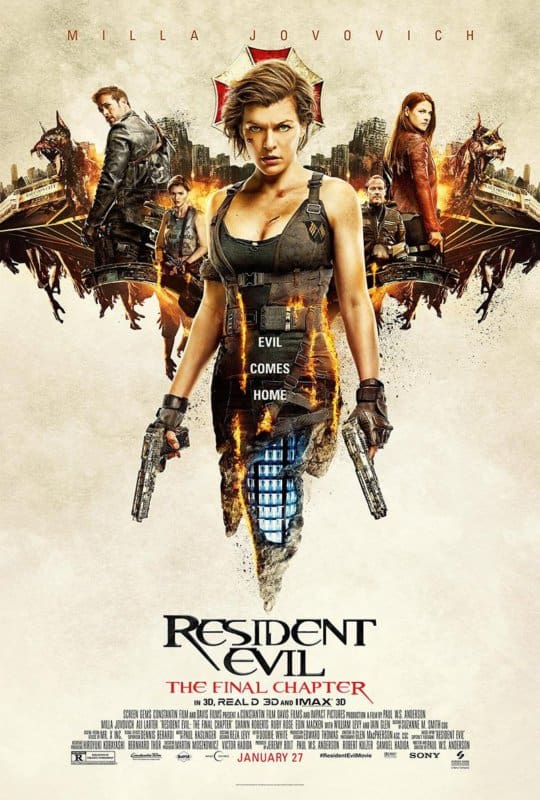 Based on Capcom’s hugely popular video game series comes the final installment in the most successful video game film franchise ever, which has grossed over $1 billion worldwide to date. Picking up immediately after the events in Resident Evil: Retribution, Alice (the sexy Milla Jovovich) is the only survivor of what was meant to be humanity’s final stand against the undead. Now, she must return to where the nightmare began – The Hive in Raccoon City, where the Umbrella Corporation is gathering its forces for a final strike against the only remaining survivors of the apocalypse.

The sexy and talented Emily Blunt discusses here briefly her role as ‘Rachel” in the Oscar nominated film “The Girl on the Train.”

Highest Temperatures for Earth were Reached in 2016

Face the facts–climate change is real. It is not a creation by the Chinese, or liberals. Scientific data factually proves that statistically, the temperature of the Earth is getting warmer each year. The fact that it may snow in one area does not refute this reality. Global warming can also cause the weather to become largely unpredictable. If you don’t believe NASA’s data, then you deny reality. Conservative news organization Fox News factually reported that NASA and the National Oceanic and Atmospheric Administration announced that last year passed 2015 as the hottest year on record. This marks the third straight year in a row of Earth’s overall average temperatures being the hottest of all time recorded.

Snoop Dogg has stopped hitting the weed and girls gone wild long enough to slam anyone black artist that plays for Trump, though he never offered to pay the money they’d lose for not playing.

Sony Animation in the News

– Making good on the commitment to increase overall output while continuing to offer its distinctive mix of family films, Sony Pictures Animation released the project details on its upcoming roster of titles through 2018, along with additional highly anticipated future feature film projects, including one from Pulitzer Prize-winner Lin-Manuel Miranda. Kristine Belson, President of Sony Pictures Animation, says, “We are proud of the artist-driven titles we have coming to the marketplace. The abundance, variety and quality of the features are a testament to the wealth of creative talents who call Sony Pictures Animation their home.”

A small but brave donkey named Bo yearns for a life beyond his daily grind at the village mill. One day he finds the courage to break free, and finally goes on the adventure of his dreams. On his journey, he teams up with Ruth, a lovable sheep who has lost her flock and Dave, a dove with lofty aspirations. Along with three wisecracking camels and some eccentric stable animals, Bo and his new friends follow the Star and become accidental heroes in the greatest story ever told – the first Christmas.

Mavis surprises Dracula with a family voyage on a luxury Monster Cruise Ship so he can take a vacation from providing everyone else’s vacation at the hotel. The rest of Drac’s Pack cannot resist going along and once they leave port, romance zings Drac when he meets the mysterious ship captain Ericka. Now it’s Mavis’ turn to play the overprotective parent, keeping her dad and Ericka apart. Little do they know that his “too good to be true” love interest is actually a descendent of Van Helsing, arch nemesis to Dracula and all monsters! The voice ensemble of favorites returns, including Adam Sandler (Dracula), Selena Gomez (Mavis) and Andy Samberg (Johnny).

Director Genndy Tartakovsky (SAMURAI JACK, STAR WARS: CLONE WARS) is back in the director’s chair, along with Michelle Murdocca back producing and Adam Sandler executive-producing, with a screenplay by Genndy Tartakovsky and Michael McCullers (AUSTIN POWERS: THE SPY WHO SHAGGED ME). In addition to this feature film, a new animated short, PUPPY, directed by HOTEL TRANSYLVANIA’s Genndy Tartakovsky, will be debuting in theaters attached to THE EMOJI MOVIE in August 2017. In the short, the residents of Hotel Transylvania find their world turned upside-down when youngster Dennis gets a surprise monster-sized pet!

Sony Pictures Animation produces a variety of animated and family entertainment for audiences around the world. The studio is following its worldwide comedy hits-the record-breaking monster comedies Hotel Transylvania and Hotel Transylvania 2, the hybrid live action/animated blockbusters The Smurfs and The Smurfs 2, and the mouth-watering Cloudy with a Chance of Meatballs movies-with the fully animated reboot Smurfs: The Lost Village in April 2017; a surprising and comic take at the secret world inside our phones with The Emoji Movie in August 2017; the inspirational The Star in November 2017; Hotel Transylvania 3 in September 2018; and an animated Spider-Man feature from the minds of directors Chris Miller and Phil Lord in December 2018. The studio, in conjunction with Aardman Animations, has produced two critically acclaimed feature films: the CG-animated family comedy Arthur Christmas; and the Academy Award® nominated stop-frame animated high-seas adventure, The Pirates! Band of Misfits. In 2007, Surf’s Up also received an Academy Award® nomination for Best Animated Feature Film; a sequel entitled Surf’s Up 2: WaveMania now available on DVD and digital. The division, whose first feature film Open Season led to a very successful movie franchise including the brand new Open Season: Scared Silly now available on digital, DVD and Blu-ray, was founded in 2002. Sony Pictures Animation is a division of the Sony Pictures Motion Pictures Group.

Prince Edward Island used to be the only province in Canada that did not offer abortions. No more. The island now joins the rest of Canada in aborting up to 12 weeks of term.

Creepy Canadian Kevin O’Leary is allegedly promoting beastiality, reportedly stating regarding his view of the modern family, “I don’t care if you want to marry a goat. I am for it. I really am.” Let’s get one thing straight Kevin, beyond the fact that this is an utterly sick, depraved thing to say or consider, unless your goat is the next Talking Ed, goats cannot consent, which means you are promoting animal rape. Now, stop it and go away.

The sexy, lovely, and talented Anne Hathaway, who I had the pleasure to meet two years ago at the LA Art Show, is reported to be starring in the upcoming MGM remake of Dirty Rotton Scoundrel’s, with a female cast, called Nasty Women.

Speaking of China, China has now just invested 1 billion dollars into Paramount Pictures, continuing their trend of buying up Hollywood.

Investigations has reportedly uncovered cruel use of dogs for student training by universities and veterinary medical schools in Japan. Hundreds of dogs are bought from commercial dog suppliers by Japanese veterinary schools every year to be experimented upon, and then cut up and thrown away. Contact my office if you want info. on how to help fight this evil practice.

President Obama has established The Obama Foundation, a non profit group that will include the Obama Presidential Library in the South Side of Chicago.

This content is copyright, 2017, Bruce Edwin, all rights reserved. The office of Bruce Edwin and affiliates do not endorse any advertising or links that may appear on or in connection with this story.