Task Force (TF) ODIN (Observe, Detect, Identify, and Neutralize) is among the Army’s newest Aviation Battalions, chartered in August of 2006 specifically for the conduct of Reconnaissance, Surveillance, Targeting and Acquisition (RSTA) operations in support of the Counter-Improvised Explosive Device (C-IED) fight in Operation Iraqi Freedom (OIF). Rapidly organized, manned, and then deployed from Fort Hood, Texas, in October 2007, TF ODIN is a high-priority Army Vice Chief of Staff initiative, driven by the critical requirement to “win back the roads” using Army Aviation assets to maintain a persistent stare over demonstrated at-risk areas for IEDs. The inherent challenge in bringing this capability as rapidly and safely as possible to Multi-National Corps-Iraq (MNC-I) was not unlike building an airplane while already in flight, as almost all of the unit’s platforms and Mission Equipment Packages (MEPs) were fielded after arrival in theater.

This unique Aviation task force brings together several new technologies and non-standard airframes to create synergy in the C-IED fight throughout the OIF battlespace. Alpha Company is the only “Warrior-Alpha” Unmanned Aircraft System-equipped unit in the US Army. The Warrior Alpha is an extended range multi-purpose hybrid unmanned aerial vehicle. It is capable of flying sorties around the clock with versatile Electro-Optical/Infrared, or Synthetic Aperture Radar payloads, and carrying both Laser Range-Finder Designator and Laser Target Marker. This workhorse has already flown in excess of 6000 hours in support of all Multi-National Divisions in the first seven months of OIF service alone.

Bravo Company is a manned Army Reserve Aviation unit comprised of C-12 Cessna platforms and pilots from throughout the US Army Reserve Aviation structure. These C-12 airplanes have been retrofitted as either Aerial Reconnaissance Multi-Sensor (ARMS) or Medium Altitude Reconnaissance and Surveillance System (MARSS-II) RSTA platforms, in order to perform their C-IED mission. ARMS and MARSS-II airplanes carry an aircrew of four: two pilots and up to two onboard analysts who provide real-time imagery analysis for the warfighter on the ground. Bravo Company is further equipped with the addition of several unique off-the-shelf collection systems, which are contractor owned and operated. Among these, Constant Hawk, a modified Shorts-360 airframe, provides a forensic backtracking capability for analysts in their effort to detect the origins of specific anti-Iraqi or anti-Coalition attacks. Highlighter is another C-12 based package which provides a detects change over time in terrain beneath a selected route of flight. This technology can provide much-needed early IED warning for approaching Coalition convoys.

The TF ODIN Aerial Reconnaissance Support Team (ARST) provides a unique, dedicated platoon of imagery and multi-source analysts for both real-time and after-action analysis of TF ODIN provided imagery. During and after each air mission, TF ODIN analysts provide feedback to supported units throughout MNC-I on their area of operations with a focus on specified areas of interest or particular requests for information. With certain platforms and MEPs the ARST can even provide forensic backtracking from identified significant events. Furthermore, analysts onboard TF ODIN aircraft and in the ARST can detect and designate targets for CAB assets and supported ground units, providing a critical sensor-to-shooter link. With the most advanced analytical software and networking tools available, both Army and contract analysts within TF ODIN provide supported units with full-motion video and populate remotely accessed databases with imagery derived products, directly supporting their mission.

The task of integrating numerous non-standard aircraft, several exploitation systems, and dozens of civilian contractors while performing management and oversight for the contracts in place for TF ODIN is incredibly challenging for a unit deployed in combat and supporting Brigade Combat Teams in the daily fight. This unique task force requires a systems integration officer, contract officer representatives, and government flight representatives in order to ensure that minimum infrastructure and oversight are in place to accept and assimilate all of the program office-provided, contractor-operated, and contractor-maintained materiel.

Others issues smaller in scale, yet equally as critical, such as ensuring that commercial off-the-shelf avionics and radios were compatible with Army communications security requirements also needed solutions. To assist in this endeavor, a rated aviator in the Acquisition Corps was assigned as Chief Systems Integrator for TF ODIN. The efforts and perspective of this Systems Integrator have contributed greatly to “building this airplane” in flight. Unlike traditional fieldings of Army equipment, TF ODIN equipment remains within the Advanced Concept Demonstration phase of the acquisition life-cycle model. This is not the first time materiel has been delivered from the Project Manager directly to operational units, but this is the first time that an entire battalion-sized aviation task force was developed around the concept of using all non-standard material solutions to directly support ground forces in contact.

In February, TF ODIN was placed under the control of the 25th Combat Aviation Brigade (CAB). At that time, work ensued to develop the TTPs for both manned and unmanned RSTA assets to team with the CAB’s rotary wing platforms across the battlespace to detect, illuminate, designate, and engage valid targets with the weapon systems on board Air Weapons Teams, Scout Weapons Teams, and Joint platforms. Tremendous synergy is created by this manned-unmanned teaming of Army Aviation

assets in the C-IED flight, increasing the kinetic effects of the 25th CAB, while allowing our rotary wing aircraft to engage from standoff ranges and thereby improving aircraft survivability and reducing the threat to the man in the loop. These “Sensor-to-

Shooter” TTPs will pave the way for additional aviation organizations, systems and platforms to maintain a pre-eminent role in counterinsurgency campaigns like the one being fought in Iraq today.

TF ODIN continues to refine sensor-to-shooter fusion and dynamic retasking of manned and unmanned assets to address emerging targets as they are presented in the battlespace. TF ODIN’s unique ability to provide intelligence while conducting operations with their manned and unmanned RSTA platforms gives the commanders on the battlefield a persistent stare capability facilitating ground maneuver forces to successfully act against targets even while their intelligence sections conduct detailed pattern analysis based on the feeds from these platforms.

TF ODIN has been an ideal test bed for several new technologies in the C-IED fight, successfully validating these critical assets in real-world mission sets despite limited time for the full force modernization development process. Once fully constructed, this airplane “built on the fly” will undoubtedly prove its relevance in the contemporary operating environment, and take on a permanent role in the Army Aviation force structure. Dynamically teaming in real time with 25th CAB rotary wing platforms gives the ground commander kinetic and non-kinetic courses of action for actioning unique problem sets in the battlespace as they are discovered by TF ODIN RSTA assets. The TTPs developed and lessons learned here in Iraq will provide an excellent mold from which to cast future generations of effective “Sensor-to-Shooter” RSTA battalions, while simultaneously providing an effective airborne C-IED asset for the OIF fight today. 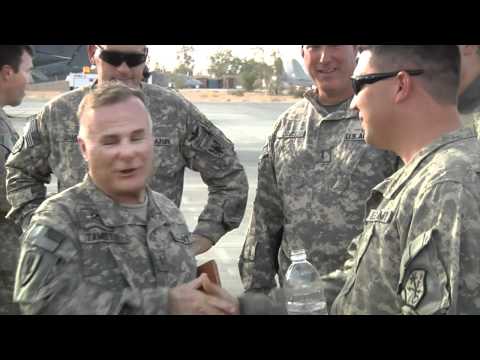