Paratroopers of the “Panther” Brigade said farewell to their brigade commander and five battalion commanders during a change-of-command ceremony Jan 24, 2008, at the Ritz-Epps Physical Fitness Center on Fort Bragg, N.C.

Lt. Col. Scott A. Harris, commander of the 1st Battalion, 505th Parachute Infantry Regiment, relinquished command to Lt. Col. Dave Bair, who was formerly assigned as the chief of staff for the 82nd Airborne Division’s Rear Detachment, at Fort Bragg. 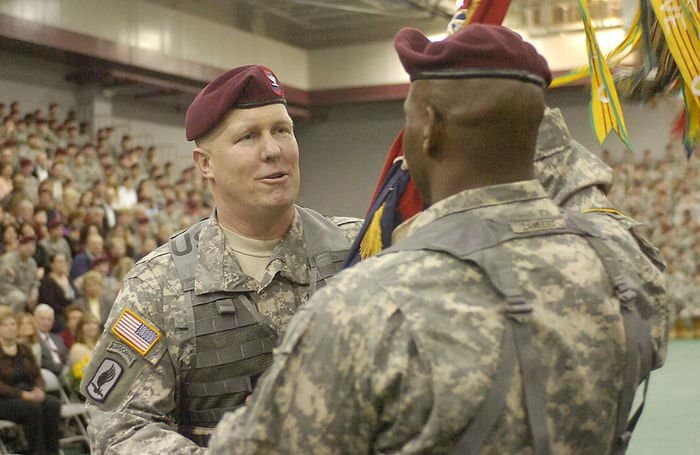 Lt. Col. Troy A. Stephenson, commander of the 3rd Brigade Special Troops Battalion relinquished command to Lt. Col. Kenneth A. Rector, who was formerly assigned as the Deputy Director of Intelligence for the Special Operations Command Central, at MacDill Air Force Base, Fla.

After the passing of the brigade colors from Owens to McGuire, Maj. Gen. David Rodriguez, 82nd Airborne Division commanding general, welcomed Col. McGuire and the new battalion commanders to the 82nd family and spoke about the challenges the 3rd Brigade Combat Team will face in the future.

“Colonel McGuire and his team have their work cut out for them as they prepare to go back to the fight,” said Rodriguez. 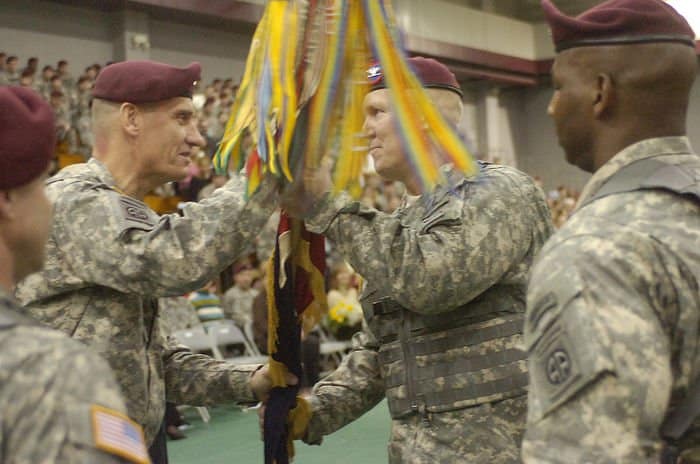 Under his tenure, Owens led the 3rd Brigade Combat Team, 82nd Airborne Division, on a successful short-notice deployment in support of Hurricane Katrina relief efforts in New Orleans. Owens recently led the Paratroopers on a 15-month deployment in support of Operation Iraqi Freedom. Like Owens, the battalion commanders led their units through missions such as Katrina and Operation Iraqi Freedom.

During his remarks, Owens spoke to the Paratroopers of the 3rd Brigade Combat team and expressed his appreciation of their service during his time in command.

“I can spend all day talking about our time in Iraq and the sacrifices our troopers made. And I still could not give justice to the courage, dedication and perseverance of our Paratroopers,” said Owens. “The Panther team performed magnificent and I could not be more proud.

Owens concluded his remarks by thanking his battalion commanders for their service throughout his tenure as brigade commander.

McGuire then spoke and conveyed his pleasure in taking command of the 3rd Brigade Combat Team.

“Words can not express how excited the entire McGuire family is in re-joining the “All-American” and “Panther” team. It is truly an honor,” said McGuire. “I pledge to you [the Paratroopers] my commitment and those of the incoming battalion commanders to ensure we are ready for the fight.”

McGuire is a native of Alamo, Calif. He as commissioned as an Infantry officer

upon graduation from the United States Military Academy at West Point in 1987. He earned advanced degrees in International Relations from the University of Chile and a Master of Arts in National Security and Strategic Studies from the Naval War College.

McGuire and his wife Susan have four children: Tom, Maria, Erin and Patrick.