July, 2003 MSgt White was taking part in what was supposed to be a routine training day for the Marines. Having done 25 parachute jumps previously, White was the “stick leader” among the group of 21 jump novices. First to jump, he knew almost immediately not all was as it should be. So began an incredible story of courage and determination as White not only survived the accident, but also proved doctors wrong who said he would probably not walk again. 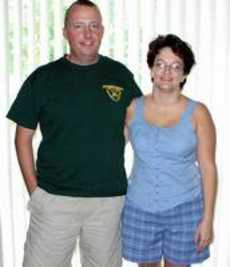 Gunnery Sgt. Jonathan White and wife Peggy have plenty to smile about now. After a parachuting accident just over a year ago it was in doubt whether he’d ever walk again, but he has since returned to duty and is continuing his career.
Fred Zimmerman / Stars &Stripes

This year, MSgt White is running in the Injured Marine Semper Fi Fund Marathon, and he needs your help. Held in October, this marathon raises funds to support the injured Marine heroes and hero families.

Lt. Cmdr. Robert Rosenbaum, a neurosurgeon, is the man who the Whites credit with this amazing recovery story, but MSgt White and his wife also deserve full credit for his recovery:

“He said, ‘Promise me I will walk again,'” Rosenbaum said. “It’s a good rule for physicians not to make promises and Jon really caught me off-guard. He got me emotional to the point where I promised him he would.”

Rosenbaum wasn’t sure he could hold up his end of the deal, as the initial diagnosis was that White would be a quadriplegic.

Within a year of this accident, MSgt White was running again, and today, training is well underway for the marathon later this year. The White family is committed to doing their part in “helping other Marines and their families,” and you can also do your part. Get to know this amazing family, and then go to their official site and find out how you can donate. As Peggy White(herself a Marine veteran) says on that page:

.” ..we certainly can do our part now and help our brothers and sisters in our beloved Marine Corps! We are walking and running for those who truly understand what it means to be a Marine and those who support us! It ain’t over til It’s over!…”