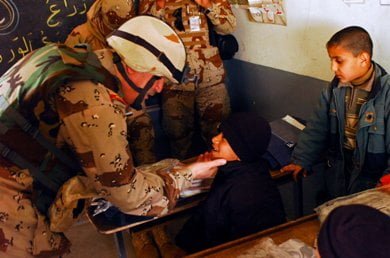 The Iraqi Army has been performing humanitarian missions in Kirkuk for months with coalition forces, but today’s mission was not only led by the 2nd Brigade; every facet of the mission from planning to execution was performed with little coalition assistance.

Gen. Anwar, commander of the Iraqi Army 2nd Brigade, was at the forefront of planning the humanitarian effort, and was at the schoolhouse to personally visit with some of the children and hand out school supplies.

The Iraqi Army visited classrooms with backpacks, pens and pencils, and paper in hand for the students.

The principal of the schoolhouse, Hamed Thnon, said he was pleased that the Iraqi Army visited and commented on how happy the children seemed.

“The children are very happy with the gifts,” Thnon said. “Friendship between the children and the Iraqi Army is important to build a new Iraq. I will tell my family about this.”

Anwar said he selected this schoolhouse because of the area it is in has been problematic. He thought this gesture would help build a relationship with the community and the security forces in the area.

This mission was entirely planned and executed by the Iraqi security forces, something coalition forces have been working toward for a long time now, said Maj. Steven M. Howell, the 2nd Iraqi Army Brigade Military Transition Team chief.

The Kirkuk government worked with the Iraqi Army and the principal of the school to succeed in today’s mission. Howell said that all elements of the government working together are important for the future of Iraq.

“If Iraq is to succeed, it will take the army, police, and government working as one to demonstrate that democracy works,” Howell said.

Today’s mission not only was a testament to that, but also showed that the many months of training and working with the Iraqi Army is helping them establish the future of Iraq’s freedom.