Its a great story, picked up by TV cameras.

He came home to regroup, after spending all his own money. Now he is going a second time and needs your help. Bureaucracy is still causing major problems and you can help overcome those problems and help people directly. 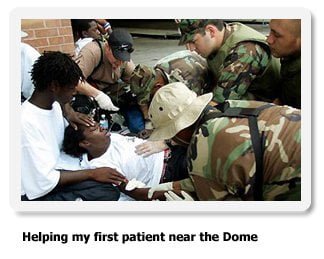 This is his story:

It took me a full day – I struggled with the question of should I go or should I stay. You have probably already said to yourself or others, “I sure wish I could help…” Well, let me challenge you on that by saying it is time for action, not for talk. Let’s not waste our breath on what didn’t happen, what could be done, or what should be done until we take action to do it ourselves; let’s make good things happen today! I need your help, so please get involved.

Do you see the picture above of people helping a woman on the street? My wife found this picture on the Fox News website; I remember when it was taken. Not because I took it, but because I am the guy in the black hat trying desperately to stabilize this woman so she doesn’t die. How I got there is an interesting story.

So How Does a Former Army Medic Turned Author End Up Protecting People, Keeping the Peace, and Saving Lives In New Orleans?

My son cried when I told him I was leaving to go because he had been watching it all on the news. He said to me, “I know you want to help people but I am scared… I don’t want you to get hurt.” “Me either son.” I said to him and we hugged. “Don’t worry…” I assured him. “It will be alright.”

Like you, I am human and I think about these things. But there’s more to it than that; bureaucracy convinced me that I had to go or more people would die! I know that the Lord has given me the ability to handle situations that others wouldn’t dream of being a part of; most people prefer safety and security. Why put yourself in harms way?

I have to admit, one of the things that seems to have gone wrong is the lack of coordination. When I got down to the French Quarter I didn’t see ANY police cars or EMS actively patrolling the area. There were plenty of air flights, but on the ground, things moved at a snails pace.

For example, in the market I saw a group of police from Arkansas who said they had been sitting there with no orders for a day because nobody seemed to know where to put them; they just had no idea what they were supposed to do – so they just sat there. Didn’t patrol and had no idea what was going on. I drove up to them, talked to them about that, and then drove off on my own to see if I could help. Bureaucracy is what is killing people; it is a lack of coordination and will to “just do it.” That is one of the main reasons I have to go back…