The protagonist of the novel Gabriel Sauers, after accidentally shooting his grandson in the foot while hunting in the wild, remembers his arrival in Vietnam as a draftee. Through his eyes, the readers see the miserable living condition of the soldiers in a land that is far from home in every sense. With time, the uncertainty of life in the war zone accumulates as Sauers witnesses many a trauma including the death of his fellow soldiers and the ugliness of the worlds most dangerous and senseless situation-kill or be killed. 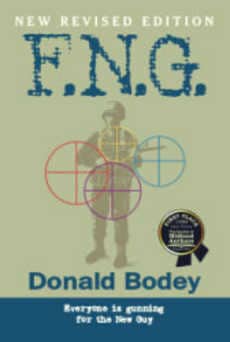 The narration is raw and imparts the closeness of the misery, physical and psychological, that a newcomer experienced fighting in Nam. Bodey’s writing skill is concentrated in the imagery of the places, people, and situations that constituted the frightening experiences of its leading character.

In this book, you not only read about the Vietnam War, but you see the war, smell the rotting life affected by it, and hear the silent cries of the souls thrown into a pit of horror. And by the time you get to the novel’s end, the suspicion of whether Sauers really shot his grandson accidentally makes you think twice about the deepest scars war leaves on those who “fight” it.

There’s quite a bit of military slang in F.N.G, reflected in the title, and the author has made available an online glossary on his website. While may not be an enjoyable book for many female audiences, for all people interested in serious war fiction, this novel is worth reading.