British hostage Peter Moore has been freed after spending more than two-and-a-half years in captivity.

Peter Moore, a computer expert, was seized along with his four British bodyguards at the finance ministry in Baghdad on May 29, 2007.

Unfortunately, at least three of his bodyguards did not make it, as the bodies of Alec MacLachlan, Jason Swindlehurst and Jason Creswell were handed over to the UK authorities.

It is believed that the fourth guard, Alan McMenemy, is also “likely” to be dead, but this has not been officially confirmed.

According to reports, 36-year-old Peter Moore, who is currently at the British Embassy in Baghdad, is in good health and expected to be reunited with his family and friends very soon.

Foreign Secretary David Miliband, who has spoken with Peter Moore, said the former hostage was “to put it mildly absolutely delighted” at his release.

Peter’s father Graeme, 60, from Wigston, Leicestershire, said he was “over the moon” at the news, adding “I’m breaking down; I’m just so overjoyed for the lad. It’s been such a long haul.” 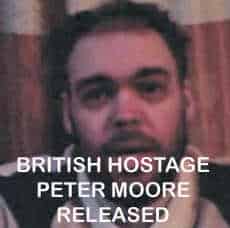 It is difficult to imagine being held hostage for such a long time, especially knowing that there was a very real threat of execution each waking day.

Such a terrible ordeal is certain to live in Peter Moore’s memory for the rest of his days, but hopefully he will adjust to his freedom as quickly as possible, and enjoy a normal and long life.

It is not often we receive good news from Iraq, or any of the other areas engaged in war, but for once we can share in the happiness of Peter, his family and friends. Sadly, many thousands have been less fortunate, and we should continue to think about all those that haven’t (and will not) enjoy such a happy ending.