7 Soldiers with 2BCT, 4ID were able to take a break from their deployment at the National Training Center to reenlist. The reenlistment ceremony took place at the Painted Rocks landmark and was conducted by the 2BCT Commander, COL Henry Kievenaar. The Soldiers reenlisted despite the pending deployment to Iraq. “This definitely says something about the kind of dedication we see in our Soldiers throughout 2BCT, 4ID” said MSG Robert Ahern, 2BCTs Senior Career Counselor. “Although all the Soldiers know we are headed back to Iraq, we continue to see a high number of reenlistments in Warhorse”

The Soldiers were flown around the training area of the National Training Center in two UH60s immediately following the reenlistment ceremony. The Soldiers were also placed on the first flight back to Ft Carson, Co. as an incentive.

The following Soldiers reenlisted during the ceremony at NTC: 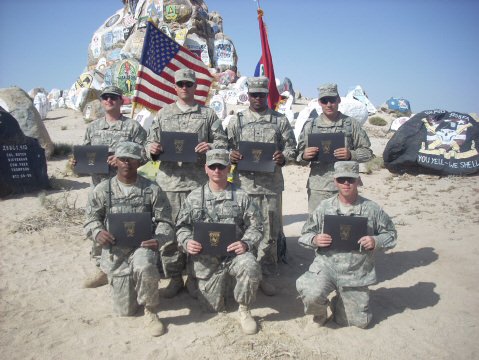