When studying the history of newspapers and news service, one can observe the rapid changes as the years fly by. Print newspapers are moribund if not already deceased. Electronic news service is thriving. Internet news service is here to stay. But is traditional print news making a smooth transition to an electronic format? Not really!

NewsBlaze is my favorite electronic news service. Since 2005, Alan Gray, the founder of NewsBlaze, has launched it exclusively as an electronic news service. It’s not regional (and yet it can be, if it so chooses), but rather global in nature, with independent reporters covering important untouched news from India, Africa, China and even Wall Street. 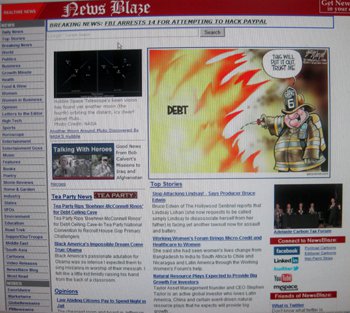 Why, you might ask, can independent writers provide unbiased news? Why, because they are not pressured to promote a hidden agenda of some sort. NewsBlaze reporters do have biases, but that’s okay, since what they have to say is unfiltered.

Since it is unfiltered, it’s a natural bias (complete objectivity is unachievable), not driven by a political or economic agenda held by the CEO of a cold media conglomerate.

Why is Watergate (as aptly documented by Carl Bernstein and Bob Woodward in the book All The President’s Men) the greatest news scoop of all time? Why, because Bob and Carl shattered the shroud of secrecy and criminal intent of the Nixon Presidency.

The Washington Post drew the sword in the sand, and said we have the right to report the truth, and the American People have the right to know their president is a crook. A news service is free from government control. Repeat this as a mantra as much as possible until it sinks in 100%.

This was formerly known as ‘Freedom of the Press.’ What does this historic breakthrough, this shrine of virtue and integrity for newspaper reporters, have to do with NewsBlaze anyway? Well, you’d have to take a trip on a boat in my mind to be completely clear about this.

But since this won’t happen, I’ll attempt to express some thought processes that are mere instinctual intuitions, by way of analogies, of what happened back in 1972 compared to today’s internecine warfare on the Internet, a ruthless grab for readership market share.

The Nixon government, including the FBI, obstructed justice and tried to censure the news. The Washington Post fought back and ultimately won a major victory for journalism. There are bullies on the Internet now (they’re not the government, but resemble it).

All fans, readers, and writers should make every effort at their disposal to promote stories on NewsBlaze. The best way to do this is to push the social media buttons, such as Google +1, Twitter, Facebook, StumbleUpon, LinkedIn, Care2, Reddit and Digg. And let your friends, neighbors, and co-workers know that NewsBlaze is the best electronic news service around, bar none.

Because of ruthless Internet politics, a politics that is still taking shape, NewsBlaze is in jeopardy of surrendering the wire to the wolves of ‘blasphemous tabloid journalism.’ We just can’t afford to let this happen. STAND UP AND UNITE!