People in a rush often skip breakfast and then later rationalize that it’s okay, telling themselves they didn’t need those breakfast calories anyway.

But not so fast! If you’re among those who think you can escape your calories by running out on them, think again. New research shows that not only will those breakfast calories be waiting for you at dinner time, they’ll have reinforcements!

A new study out of the University of Texas shows that people who skipped breakfast actually ended up eating more overall throughout the course of a day.

Why Breakfast Calories Are Recommended

Breakfast tends to be a meal where it’s easy to eat healthy, because of all the nutritious and convenient foods that are traditional for this first of our daily meals – dairy foods like milk and yogurt, whole grain cereals, breads and muffins, eggs and fruit. There are lots of good choices.

But people often skimp on their morning intake anyway, simply grabbing whatever they can hold in one hand while steering with the other. That leads to a lot of low-nutrition breakfasts of coffee and donuts or pastry that get wolfed down in the car.

Or worse, people often skip their breakfast altogether. Maybe it’s the because of the morning rush, but many people skip breakfast on purpose, even if they’re hungry, subscribing to the notion that if they can just hold out for a few hours, they can leave those breakfast calories behind them, move on to lunch, and reduce their daily intake by one meal. They couldn’t be more wrong.

The University of Texas researchers tracked a week’s worth of intake for nearly 1,000 people. What they found was that when the participants ate a healthy, reasonable-sized, breakfast of about 400 or 500 calories, they consistently ate less throughout the rest of the day! When they ate a breakfast of just a couple hundred calories, they tended to load up later, even without meaning to.

Aside from the temptation to binge after depriving themselves, there’s apparently something more at play.

That would be consistent with the diurnal sleep/wake cycle that has governed our species since time immemorial.

Just think, even 100 years ago, most people didn’t have any kind of light other than firelight once the sun went down, and that pretty well put an end to the day’s activities. There was none of this staying up for the late-night comedy with a quart of ice cream or a bag of popcorn.

Generally speaking, we didn’t have much need to keep our bodies going into the night. It makes sense that the body’s mechanism for sending messages of, “Thanks, I’ve had enough,” wouldn’t need to function as well late in the day.

Of course, the advent of electricity has pretty well messed up that cycle. We can now munch well into the night, and we do.

The researchers also noted that as the day wears on into night, our meals and snacks get closer and closer together, time wise. They saw that it was an average of four and a half hours hours between breakfast and the usual lunch break at noon, but then it’s usually only a couple hours from the afternoon snack that we go for dinner. And after dinner, it’s as little as an hour and a half before we’re having that nighttime snack, so any late day eating is more likely to be followed by more eating.

And then add to that all the social and environmental distractions that come at us later in the day. We may be eating as part of some activity, perhaps a party, or even just when refreshments are served at meetings or classes. It could be that we’re watching television while we dine or snack, and other research has shown that if we’re distracted from what we’re eating while we’re eating, we’ll eat more of it.

Whatever the reason for the early-eating effect, our response to it should be pretty obvious: have a good breakfast. Previous studies have shown that people who eat good cereals tend to be lower weight, and plenty of evidence that shows that breakfast eaters have a lower rate of obesity overall.

But the key here is GOOD – good cereals, good breakfasts – no sugary, 400-calorie Danish and a swig of juice! That sort of thing will only cause a spike in your blood sugar and leave you ravenous in an hour and a half.

That doesn’t mean you need to whip up a big fluffy omelet. Instead, have some good dairy protein from milk or yogurt, a nice whole-grain muffin or toast, and a piece of fruit. If you have the time to sit and eat some cereal, remember that breakfast cereals are notorious sources of added dietary sugar, so choose a good, whole-grain selection without the extra sugar.

And don’t settle for just knocking back a glass of juice. That will give you some vitamins and nutrients, but again, it can cause a spike in your blood sugar if it’s not accompanied by any bulk. Try to have a piece of whole fruit instead.

The most important breakfast change you make may just be committing to having breakfast in the first place. And while that’s easier said than done, it might just be one of those essential lifestyle changes you have to make if you really want to reach and keep a healthy weight.

If you start the day right, you can end it up lighter overall.

There’s an ever-growing body of evidence that eating breakfast will help keep your weight down, so it’s worth a couple minutes thought or preparation the night before, if that’s what it takes to make sure you have time for your morning meal. To have the lasting effect of satiety, your breakfast should be about 400 to 500 calories and include protein and fiber.

She is the author of Helping Your Overweight Child – A Family Guide, which is available at DrCederquist.com, Amazon.com, or by calling toll-free 1-800-431-1579. 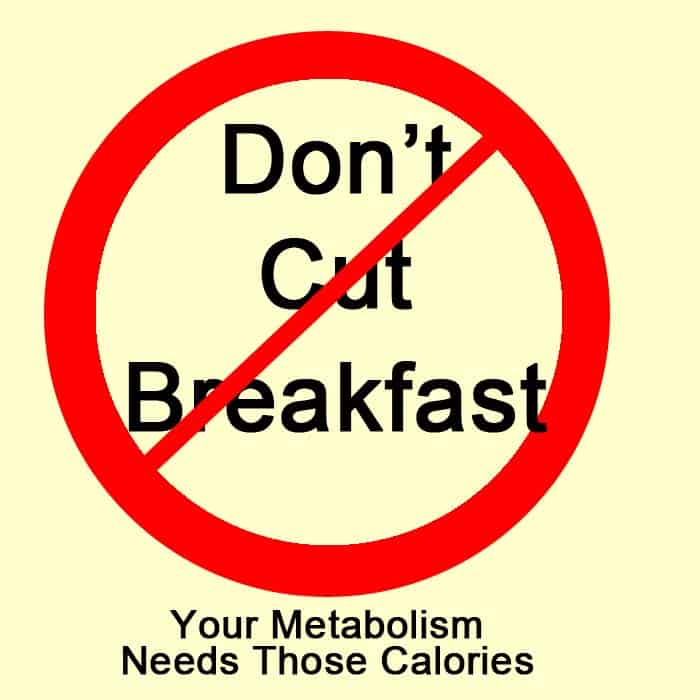