Does profit supersede saving lives? In one word: Absolutely!

We all believe we are pretty darn important. But are we really or does profit Trump us in that department?

For the purposes of this article I will be discussing diabetes of which I am personally affected.

Diabetes has two types: Type I diabetes and Type II. The differences in the two are substantial.

*there is a third class of diabetes called gestational diabetes which affects pregnant women. For the purposes of this article we will only be discussing the two formally mentioned.

Type I diabetes is the more serious of the two. Also known as “insulin dependent” or “juvenile diabetes,” this version of the disease is the one most responsible for deaths associated with complications from diabetes. Type I is hereditary and “normally” is passed by every second generation from the source. This type of diabetes is a result of the body’s (pancreas) inability to produce insulin on any level. Complications from Type I diabetes include limb loss, blindness, heart failure and kidney failure.

Type II diabetes is most common (90-95% of all cases) which can be developed through rapid weight gain amongst others. Type II is a result of the body’s resistance to insulin whereas the cells in the body are incapable of processing the body’s natural insulin, correctly. This type of diabetes is controlled by diet and pills alone without the need for insulin injections.

Ok so that’s your crash course on diabetes.

Diabetics are what is called a “captive market” whereas we either buy their medicines, or face the consequences. And normally they are pretty serious. There are ad campaigns everywhere telling diabetics to control their affliction or die. Yes it’s that direct and to the point.

Without even touching on the insulin, needles and other supplies needed to “control” your diabetes, let’s focus on my personal “thorn.” ..blood glucose test strips.

Test strips as they are called, are used by poking your finger or arm and extracting a small drop of blood and applying that to the test strip. The strip is then inserted in to the glucose monitor where a result is displayed. The average Type I diabetic should be monitoring their blood glucose at least 5 times daily. In some cases this is substantially higher.

Now remember here, this is only one small portion of the income generated by pharmaceutical companies in the “business” of selling diabetes supplies. 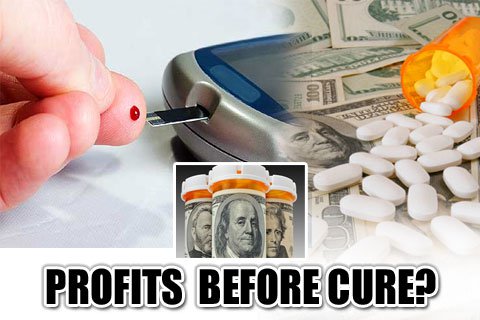 What are the costs and therefore the net profit for these strips? Market researcher Frost & Sullivan estimated the worldwide market for glucose monitors and test strips at $6.3 billion as of 2005. The market is forecasted to grow 8% annually in North America and 16% a year elsewhere. Imagine where profits are today?

Finding out the “true costs” involved in manufacturing a product responsible for profits to companies in the billions of dollars, is a difficult task. Why would pharmaceutical companies care to reveal just how much they are juicing their “captive market”?

However it was David Kliff, a financial analyst who specializes in the diabetes marketplace, who estimated the cost of producing a test strip at 8 to 12 cents. If this is in fact accurate, this would represent a profit margin of some 900%.

Ok at this point I’m going to remind you again that we are only discussing the profits involved in the test strip market and not considering the actual medicines and other supplies necessary to control this life threatening illness.

Let me know once you’re recovered your jaw from the floor and are ready to proceed.

Whilst I was in Canada, I use to often wonder why drug addicts, who have a choice, can receive needles and morphine to support their “addiction” whereas diabetics are forced to pay pay and pay some more. Nothing comes free for diabetics. Possibly this is just another ploy from money hungry pharmaceutical companies to create yet another “captive market” to juice?

We all know by now the term residual income I hope? Well this is when, for example, the phone company gives you a shiny new cell phone for free or next to it. However attached to that “free phone” is a three year contract at a minimum fee of $$$ per month. That’s residual income. Same goes for computer printers and their ink and most importantly, same with glucose monitoring and their test strips. Free is not really free at all!

Considering this scenario is not unique to the diabetes industry but rather straight across the board for other serious illnesses like cancer, multiple sclerosis and more, can we really believe that pharmaceutical companies and governments alike, really give a rat’s arse about a cure? Especially if it involves renouncing their multi-billion dollar profit margins.

You’re important…but not THAT important!