According to recent research by scientists, men live shorter lives than women because of genes that are present in their sperm.

Although these genes are carried by both men and women, they are only active in men. This enables men to grow bigger bodies (at least some men), but there is a price to pay for this. The average lifespan of a man (in the UK) is about 4 years less than a woman.

The tests were carried out on mice, but researchers believe it could apply to all mammals, including humans. The gene in question is called Rasgrf1, and is passed on by fathers.

Lead researcher Professor Tomohiro Kono said: “We have known for some time that women tend to live longer than men in almost all countries worldwide, and that these sex-related differences in longevity also occur in many other mammalian species.”

Kono added “The study may give an answer to the fundamental questions: that is, whether longevity in mammals is controlled by the genome composition of only one or both parents, and just maybe, why women are at an advantage over men with regard to lifespan.” 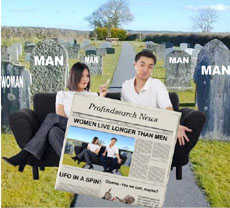 So guys, if the scientists are right, we can no longer accuse our partners of “nagging” us into an early grave.

However, I suspect that many men will take some time to accept this latest scientific data, but maybe the men can use this to their advantage? Perhaps, the next time your wife or girlfriend asks you to help around the house, you can use this knowledge to gain a little sympathy?

In the meantime, I have to finish the washing-up, get the vacuum cleaner out, do a little shopping….