Nearly 70 patients at the Keysaney hospital in Somalia’s capital Mogadishu have benefited from a cash aid donation by the recently-launched UK-based charity, Alpha Trust Organization, whose leaders are currently visiting the Somali capital.

The cash aid donation was distributed to the patients by the charity leader Dahir Ali Kulmie and his secretary General Abdisalam Maoumin accompanied by several staff members of the charity’s Mogadishu office. Currently there are a total of 68 patients at the hospital and each patient received a donation of 600,000 Somali shillings in cash. 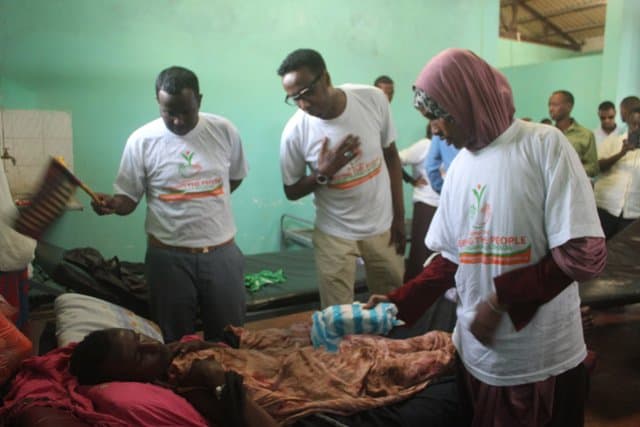 Alpha Trust Organization founder and Chairman Dahir Ali Kulmie who talked to the media during the aid distribution process said that his charity was committed to increasing its humanitarian programs in the country.

“We recently started our activities in the country as we have so far reached out to hundreds of needy families in the country and we are planning to increase our humanitarian programs as much as we can,” Mr Dahir Kulmie told reporters.

The chief of health services department at Keysaney hospital Dr. Xaaji Muse Hassan thanked the charity for coming to help the patients at the hospital saying that the cash aid was the first since the start of the Ramadan.

Earlier, the charity distributed food aid to hundreds of displaced families in Wadajir District south west of the capital Mogadishu. Likewise, the Alpha Trust Organization leader Dahir Ali Kulmie sponsored 10 orphans whose education fees and life expenses will be covered by the charity for a period of one year starting from mid July.