The Los Angeles Times, The Glendale News Press, and The Hollywood Sentinel were but a few of the top, major media that covered the unveiling of the first faith-based sculpture at Glendale Adventist Medical Center earlier this month in July, which drew an array of Glendale Adventist’s Medical Centers’ most prominent clergy and leading officers.

In the dedication ceremony photo below (by GNP’s staff photographer Tim Berger), Glendale Adventist Medical Center President and CEO Kevin Roberts, Bruce Nelson and sculptor Victor Issa flank the sculpture that Mr. Issa created for the hospital, where it now permanently resides at The Glendale Adventist Medical Center. The lifelike, multi-piece statue, stands monumentally, gleaming in the Californian sun, where the East and West towers of the medical center converge, bringing to all points of the renown medical center- a beacon of light and life, with the sculptures lifelike spirit of Christ- the healer and the compassionate teacher of all.

In the sculpture, titled ‘Come Unto Me,’ a life sized, spirit filled depiction of Jesus Christ sits at the focus of the stunning bronze sculpture, that already has visitors passing by walk a little closer to sit down and gaze upon the stunning work with its graceful and majestic depiction of a family and the prophet – Christ. “(Jesus) set the example of health ministry that we have dedicated ourselves to,” stated Kevin Roberts, president of the hospital. And the artist- Victor Issa, is similarly inspired by the prophet, with his awareness of the spirit and his compassionate outlook on life.

Victor Issa, recognized as one of the world’s greatest sculptors, is based among the rolling plains and prairies, and the heavenly snow capped mountains of Loveland, Colorado, which gives him a bounty of inspiration and beauty. The entire work of art, ‘Come Unto Me,’ complete with playing children, a women and canine, took Victor a little over four dedicated years to create. 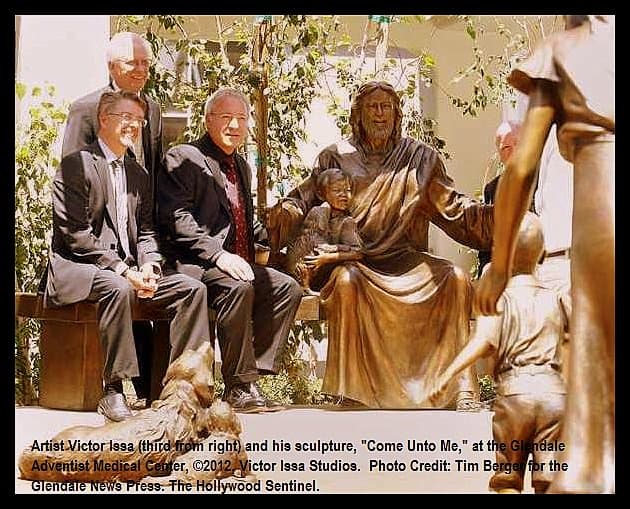 Mr. Warren Tetz, the Senior Vice President of Glendale Adventist Medical Center, stated that he wanted a faith-based sculpture at the center of the hospital’s campus. He stated, “The aim was to provide a physical setting where the community, physicians and staff members could have a ‘spiritual experience,’ he said. And Victor Issa’s work does just that. Continuing, concerning the art work, Mr. Tetz stated, “It really represents that those who are hurting can come to Jesus and get healed. We just feel that is our mission.”

Jesus Christ said, “You have heard the law that says, ‘Love your neighbor’ and hate your enemy. But I say to you, love your enemies! Pray for those who persecute you! In that way, you will be acting as true children of your Father in Heaven. For He gives His sunlight to both the evil and the good, and He sends rain upon the just and the unjust alike. If you love only those who love you, what reward is there for that? Even the corrupt tax collectors do that much. If you are kind only to your friends, how are you different from anyone else?”

Such is just one of many messages of peace and love that ‘Come Unto Me’ represents. For each visitor, one may find their own message of hope and inspiration. And if the work brings a ray of hope or happiness to but one person, or an idea to explore those teachings that place peace and forgiveness at the pinnacle of human behavior, than for that, and that alone- this work will have served its noble purpose. For this alone, it will have transcended the form of man, and embodied the depiction of its’ expertly crafted subject- Jesus Christ.

To take a tour to the sculpture in person, visit The Glendale Adventist Medical Center at 1509 Wilson Terrace, Glendale, California, 91206. To learn more about the artist Victor Issa and view more of his art work, visit www.VictorIssa.com.