Four drugmakers have received approval from US health officials to supply a vaccine that is designed to prevent the H1N1 swine flu virus, saying that there is enough to inoculate all Americans who want it.

According to the FDA (Food and Drug Administration), the first supplies of this vaccine will be available within the next four weeks, but admit that not all Americans will choose to receive the vaccination.

Bearing in mind that the vaccine may not prevent a mutated form of the virus, which seems likely according to some doctors, the dangerous side effects that some have suffered, and the immunity from prosecution that has been granted to drug companies if anything should go wrong, why would anyone want to risk taking such a drug? 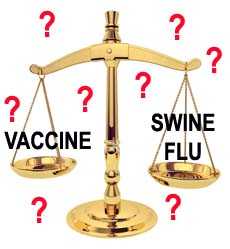 At the moment the swine flu virus is no more dangerous than any other, in fact more deaths have occurred from the usual seasonal flu viruses. So why is H1N1 causing such a panic?

Flu has killed millions of people over the centuries and continues to do so despite the availability of vaccines. With Flu having the ability to easily mutate and produce new strains, it is almost impossible to create a vaccine that will guarantee protection.

If the chances of protecting ourselves from Flu are so slim, why bother with a vaccine? Why take an unproved vaccine that has already harmed people, against a virus that produces relatively mild symptoms in the majority of patients (especially if you cannot sue the drug company if you die or become disabled because of their vaccine)?

Are the drug companies simply looking to profit from the virus at our expense (physically and financially), or is there some more sinister purpose to all of this? Whilst there is no real evidence that “population control” is a motive for vaccinations on such a large scale, it is perhaps understandable that people have given this some thought.

There are also worries that these vaccinations may become compulsory in the future, and if the drug companies are unable to recover their “investment” in producing so much vaccine (because people refuse to take it), maybe they will put pressure on the government to make it so? This may of course still happen if the “sinister” option applies.

It is of course up to the individual whether they choose to have the vaccination or not, at least while they do have a choice, but it may be safer to take a chance with the actual virus. Should this become compulsory, as many suspect it will, we should be even more determined to resist this attempt to control our lives. And let’s not fool ourselves; it is our lives that they are trying to control.