In 2015, the U.S.’ American Medical Association (AMA) called for a ban on direct-to-consumer (DTC) prescription drug advertising. The ads make patients demand expensive treatments from their doctors, said the AMA, when less costly drugs are often more effective. The AMA’s efforts were unsuccessful.

Most people realize that advertising directly to consumers has been a gold mine for big Pharma. But it has also been a gold mine for major media. Drug ads sponsor prime time TV shows including investigative news shows that might otherwise investigate dangerous drugs and Pharma tactics. (Instead, they investigate non-prescription drugs.) Pharma representatives also sit on the board of major media outlets. No wonder media give dangerous and overpriced drugs a pass and want to hold on to their ads.

Twenty years ago when DTC ads began in the U.S., Pharma found it could convince people who felt perfectly healthy (and were) that they were sick or “at risk” of being sick and needed to go to the doctor through cagey ads. Even more amazing, these impressionable consumers once at the doctor, would proclaim their self-diagnosis and ask for the drug they saw advertised. Ka-ching. 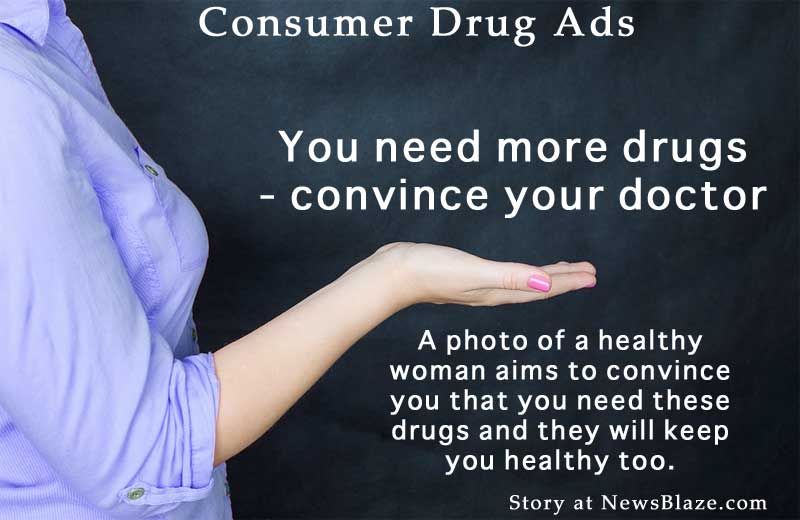 Even more amazing that, instead of resenting their demotion to order-taker, doctors often complied with the drug requests thanks to pressure from patients, from their for-profit institutions who want to keep patients coming back and drug salesmen. The pressure is so great that some medical institutions have had to teach doctors “refusal skills” for patients demanding drugs.

And there are other influencing factors behind doctor compliance like Pharma’s free lunches, vacations, “speaker fees” and grants bestowed on them (One psychiatrist told me a drug rep sent her whole office to a Caribbean island.)

Since the 1980s, Pharma money has also subtly shaped medical school education – many now believe the “serotonin” theory of depression which has never been proved, for example – and funded medical centers themselves. The 1980 Bayh-Dole Act allowed medical institutions to partner and profit with Pharma from “drug discovery” observes Dr. Marcia Angell, former editor-in-chief of the New England Journal of Medicine, though the basic research was funded by the public, the National Institutes of Health, which sees no profits. (And which pays the inflated drug prices.)

Pharma partnerships build new academic/medical buildings as was seen with Northwestern University which made $700 million when it sold Lyrica, discovered by one of its chemists, to Pfizer enabling it to build a new research building.

And finally, don’t underestimate the power of advertising itself. If it can convince parents their children have ADHD – and they have “adult ADHD” – and they have dry eye, GERD, depression, and “osteopenia,” it can certainly do the same with medical professionals.

One example of the way drug ads “sell disease” is the aggressively advertised digestive/intestinal condition of exocrine pancreatic insufficiency (EPI) pushed by AbbVie. Though the only populations who might have EPI are those with chronic pancreatitis, cystic fibrosis, and other small groups, AbbVie ads warn that even if you have one possible EPI symptom – gas, bloating, diarrhea – you should see your doctor.

“You have to break it down for your doctor and get specific about the severity of your symptoms,” says the aggressive, high budget and unethical radio campaign. Apparently, AbbVie’s marketers worry that the doctor won’t prescribe Creon, the drug being pushed, unless patients go into great detail. Should they expel gas in the doctor’s office to leave no doubt?

Many expensive drugs Pharma pushes on TV cause the very conditions they are supposed to treat such as bone drugs like Boniva and Fosamax which can cause bone fractures, GERD meds which cause rebound acid reflux heartburn and SSRI antidepressants which can cause suicide. And Creon is no exception.

An expensive drug for an obscure condition that causes the very symptoms it is supposed to treat? It is the signature of direct-to-consumer drug advertising.