Mortimer collapsed in a shower after a “torture” session with Mistress Lucrezia and her assistant Mistress Juno in Belgium.

According to reports, Mortimer was given nitrous oxide, used as an anesthetic to prolong sadistic sex sessions.

The two women involved have both been arrested and charged with assault and battery leading to death, without intent to kill. 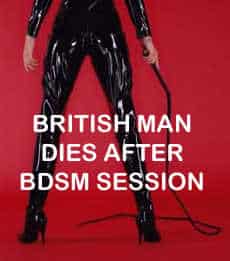 Whilst the women involved in providing this unusual service normally take a great deal of care not to put a customer in serious danger, there is always a risk that a person may go too far.

Although it may seem odd that a person is willing to pay quite large sums of money to receive such extreme pain, there are many millions of people around the world that do just that.

Most people involved in bondage and sado-masochism limit their participation to fairly mild forms of pain and role play, usually at the hands of a leather clad mistress experienced in domination.

Because of this reluctance by couples to share their kinkier interests, there are a number of sites on the Internet that specialise in bringing people together who have a mutual liking for such things. Alt.com is perhaps one of the most famous companies involved in catering for people with unusual tastes and boasts a membership of more than three million.

For the majority, it will be difficult to understand a person like Robin Mortimer, or perhaps the women who provide this service, but sexual excitement comes in many forms. One can certainly question the wisdom of this particular mistress in allowing a 58 year-old man to receive such extreme pain, and using nitrous oxide.

Thankfully, and perhaps surprisingly, deaths from sado-masochistic sex sessions are rare, and whilst we can argue about the rights and wrongs of the people involved, consenting adults should be allowed to explore their sexual fantasies, provided it does not affect others or involve minors.