There are not too many people who aren’t concerned about how many children are on medications for behavioral problems. Millions of U.S. children are on drugs for attention deficits and other problems, denying them normal development and often consigning them to a life of psychiatric meds.

But Thomas Insel, M.D., director of the National Institute of Mental Health, says in a recent blog that more children are being medicated for emotional and behavioral problems because more children likely have emotional and behavioral problems. Dr. Insel was reacting to a recent Centers for Disease Control and Prevention (CDC) estimate that as many as U.S. 10,000 toddlers are on stimulants like Ritalin. 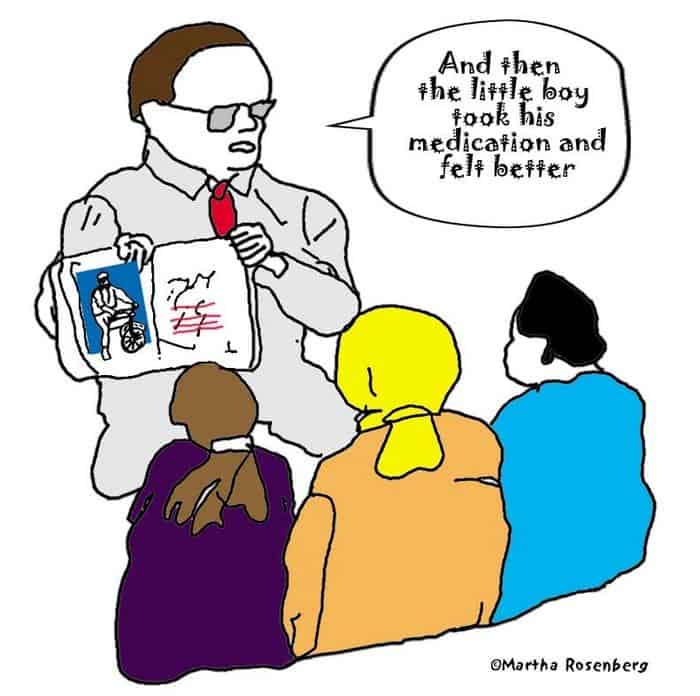 According to the New York Times, hyperactivity and impulsivity are considered normal in toddlers by medical experts and do not require medication. Nor do American Academy of Pediatrics’ guidelines for ADHD even address the diagnosis in children three and younger. But sadly, pediatric behavioral medications are one of Big Pharma’s biggest cash cows and they are aggressively marketed

Why are so many children on meds? Because in the last decades, childhood has been pathologized by the development of “pediatric psychopharmacology” which finds ADHD, conduct disorders, depression, bipolar disorder, oppositional defiant disorder and worse in previously normal kids.

The father of pediatric psychopharmacology is considered to be Harvard child psychiatrist Joseph “Risperdal” Biederman credited with ballooning the diagnosis of bipolar disorder in children by as much as fortyfold. Dr. Biederman served as the head of the Johnson & Johnson Center for the Study of Pediatric Psychopathology at Massachusetts General Hospital, whose stated goal was to “move forward the commercial goals of J. & J.” According to court-obtained documents, Dr. Biederman approached J. & J. with the money-making scheme and also promised the drug maker that upcoming studies of its popular child antipsychotic Risperdal would “support the safety and effectiveness of risperidone [Risperdal] in this age group.”

Other Big Pharma-funded researchers find “schizophrenia” and depression in children, including toddlers, which was once unheard of.

But when viewing the huge numbers of U.S. children on serious meds, Dr. Insel does not see lucrative diagnoses churned by Big Pharma to sell pills. Instead, he thinks more children may actually be “struggling with severe psychiatric problems and actually the problem was not over-treatment but increased need.” What?

Dr. Insel has had his own brush with charges of pharmaceutical conflicts of interest. Four years ago, he assured the dean of the University of Miami medical school that if he hired Charles Nemeroff, a disgraced researcher who had a National Institutes of Health (NIH) grant terminated after a Congressional investigation for unreported drug industry income, government money would not be denied to the institution. According to the Chronicle of Higher Education, Dr. Insel was leading NIH efforts to stamp out conflicts of interest at the time! Press reports said Dr. Insel wanted to repay Dr. Nemeroff for getting Dr. Insel a job at Emory University when Dr. Insel lost his NIH position in 1994. Nice old boys’ network, revolving door work, if you can get it.

At Emory, Dr. Insel, a passionate animal researcher, directed the Yerkes Regional Primate Research Center, one of the world’s largest centers for research on monkeys and great apes. Animal experimentation on primates is increasingly under the ethical microscope because of primates’ similarity to man and their ability to understand what is happening to them.

Dr. Insel was an early proponent of psychopharmacology and the antidepressants which went on to become Pharma blockbusters. He and a colleague were delighted to demonstrate that a particular antidepressant “soothed people’s symptoms within weeks, much faster than standard psychotherapy,” in his early work reports the New York Times.

Increasingly, medical leaders and associations are exposing how medicine’s financial links with Big Pharma and medical device makers are causing serious over-screening, over-diagnosis and over-treatment-not to help patients but to enrich industry. These links are especially tragic with children. Yet oblivious to the medical pendulum swinging back, Dr. Insel actually cautions in his blog that a “bigger problem” than over-medication of children and toddlers may well be “under-treatment.”