NewsBlaze News
Home USA Crime Why are So Many People Obsessed With Missing Teenager Sierra Lamar?

Three clusters of evidence. Sierra LaMar’s Samsung cellphone tossed in a field, a Juicy-brand handbag with a fresh change of clothing inside, and most curious of all, the find of a random box, apparently containing handcuffs once, along with two used condoms. It’s questionable whether the last find can be directly associated with the Sierra LaMar missing teenager case, yet it must be given a requisite thorough scrutiny.

And now suddenly the Santa Clara County Sheriff’s Office have morphed from a missing person’s case to a (more likely) criminal abduction scenario. Well, we’ve known it was an abduction ever since March 16th, when Sierra was a no show to her school bus stop, early that morning. The police must always be cautious in their public pronouncements, that are overt harbingers signaling a shift in sentiment or investigative perceptions. 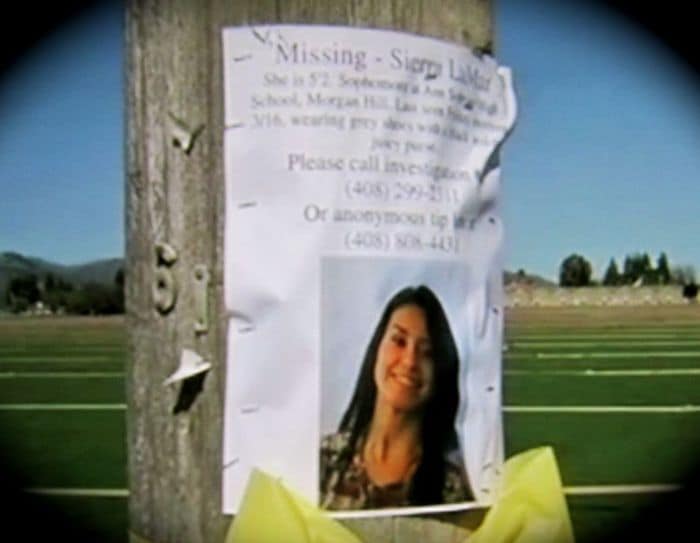 We don’t fault them for their discretion; pulling back from the immediate hurly burly, where chaos and rumor have their day (both in the newsroom and on ubiquitous social media conduits), gives investigators an advantage in catching this culprit, who may be lingering very close to the edge of mainstream society. Thus, we hear people in the vicinity of Morgan Hill, Ca. should be suspicious of neighbors, co-workers, or just about anybody who is the least bit nervous or possibly hordes news circuits to check if they’re on to him.

The situation is a bit frightening there in Northern California, as 600 plus volunteers search every nick and cranny of Santa Clara County, looking frantically for Sierra LaMar. For hidden reasons, people really care about this case. Sierra had only been in Morgan Hill since last October, when she moved in with her mother, Marlene LaMar, and her sister, Danielle LaMar, to a ranch style house on a secluded street, Paquita Espana Ct. Sierra managed to make quite a few friends at her new high school, Sobrato.

Something odd is going on here, but I can’t quite put my finger on it? That is, these reverberations are echoing on several fronts, levels or layers to the situation going on here. Perhaps many of these young people I see crying in the news footage were not actually friends with Sierra when she was still on the scene. Yet, they have whole-heartedly embraced the critical mass-inducing aspects of the case as if it is happening to them in real time!

In their minds they know Sierra personally, vicariously through the many videos, photos, and words that flash across their computer screen. Sierra’s tragedy is their own. And now her story is our own also; the search for the perpetrator (who may be but a stone’s throw from Sierra’s immediate neighborhood) becomes the responsibility of anyone who wants to get involved, by way of the internet. SOCIAL MEDIA VIGILANTISM!

Just coined a new phrase, but you must admit it captures the hysteria of what Sierra LaMar’s case has done to our collective mentality. I better stop beating a dead horse, but I sense other layers of subconscious societal behavior is at work as well. Sierra herself was a normal teenager, representative of today’s tech savvy culture, where smart phones are now a biological component attached to our body. It’s my theory that she may have come in contact with whoever did this, by way of the internet.

I think this theory is shared by many others. Educated crime experts believe she may have even known her abductor, if only casually (She’s no Rosy Larson, so don’t go there!). I share this view as well. What’s really scary, is the idea that the guilty one was perhaps, amongst the volunteer search party, using a clever ploy to deflect guilt away from himself. An odd angle indeed, if the cops are looking within, while the mostly innocent look without.