I didn’t enter the picture until just a few weeks ago. Nanette Johnston was convicted of murder on Monday, but I needed to rewind the tape back to 1994 (a long reel of tape), since I was clueless as to what had happened. A multi-millionaire health care entrepreneur, William McLaughlin, 55, was shot to death (with a 9 mm Beretta handgun) in his luxurious Newport bayfront home on December 15, 1994. I heard of this of this saga of a femme fatale’s greed and opportunism via Nancy Grace, then from 48 Hours Mystery. 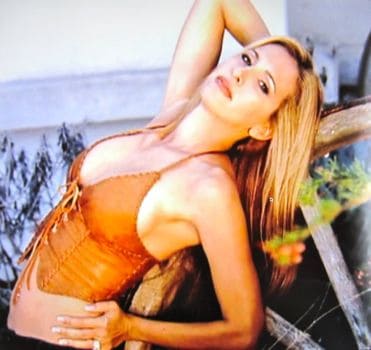 Since I knew nothing about Nanette Johnston or Bill McLaughlin, I had to latch on to some good sources, so I watched the 48 Hours Mystery feature (which can be viewed online) and recorded last night’s Nancy Grace Show. The 48 Hours Mystery special has a text accompaniment, Did ex-NFL player, girlfriend, kill millionaire? (Produced by Patti Aronofsky and Gayane Keshishyan), which I’ll definitely link for you.

One question I had, is why was this story so buried in the news all those years ago? Maybe the answer is that it was more of a local story for Orange County whereas I live in Texas (genius). Brainstorm: delivery of the news has changed quite a bit through those years, and now local news is national or even international in a millisecond! Well, the internet changed it and moreover, cable TV plays a major role now.

Okay, so I don’t hear about this fascinating saga of greed and murder (probably sex and NFL football as well) until Ms. Johnston enters the slammer for a very long stint. To top it off, the bad gal is 46 years old now. That makes her only 28 when she conspired to kill William McLaughlin and purloin all of his millions. How did Deputy District Attorney Matt Murphy prove his case? I’m still looking at all this (pay attention stupid!) but the key seems to be the house key.

Some researchers and writers are already on top of Nanette Johnson’s sordid history, which seems to stretch on for many years after William McLaughlin died on his own kitchen floor while preparing a sandwich for himself. A true crime writer, Caitlin Rather, has watched the entire trial and is currently laboring on a book about this now infamous woman, Nanette Johnston, or whatever her name is.

This is what I’ll need, a detailed paperback book (maybe a digital edition will be published also), that goes back to the beginning (of all characters involved in these troubling sequence of events) and explains everything for me in black and white. Then I can slow down and try and understand better how she embezzled a half a million dollars or was able to bamboozle Eric Naposki into doing the actual shooting.

One thing I can’t figure is Nanette was only Bill’s fiance, so how could she cash a check of his for $250,000, where she’s the one who wrote the check to herself? How could the bank have been so stupid also (is a corollary question)? Apparently, the art of fraud was another one of Nanette’s talents, along with charming men and making them feel comfortable with her companionship.

As far as Eric Naposki’s guilt goes, I’m not entirely satisfied yet. The issue or the role the washed up NFL linebacker played, is the major thrust of the 48 Hours show. Eric sure does a good job at denying he had anything to do with it. Closure came on this case on Monday, as a stone-face Nanette Johnston is led from the courtroom with her handcuffed hands behind her back. For me, it’s only just begun. I hope Caitlin Rather’s book hits the newsstands very soon!