Jodi Arias coached to the T, demeanor poised, soft-spoken, cool, calm and collect, memory sharp as a razor! Lies, Sex, and Videotapes (rather, digital cameras)? Calming blue shirt, wan and smooth in her (memorized) responses, straight dark brown hair (looks like it’s been ironed), and eyeglasses, she looks like a Nun. Jodi recollects a life re-remembered as a journey of abusive or crazy men (or parents) using her just like she’s a Sex Slave Doll!

Constructs clearly scripted while in jail for more than 4 years, or piece-mealed by a very canny defense team. Odd isn’t it; Jodi’s testimony the past two days is a carefully peppered dialectic of sex and religion, the areas of life that have the most significance in Jodi Arias’ 32 years of existence. Well, abuse couples or joins sex and religion together; abuse is the glue stick, you might say. 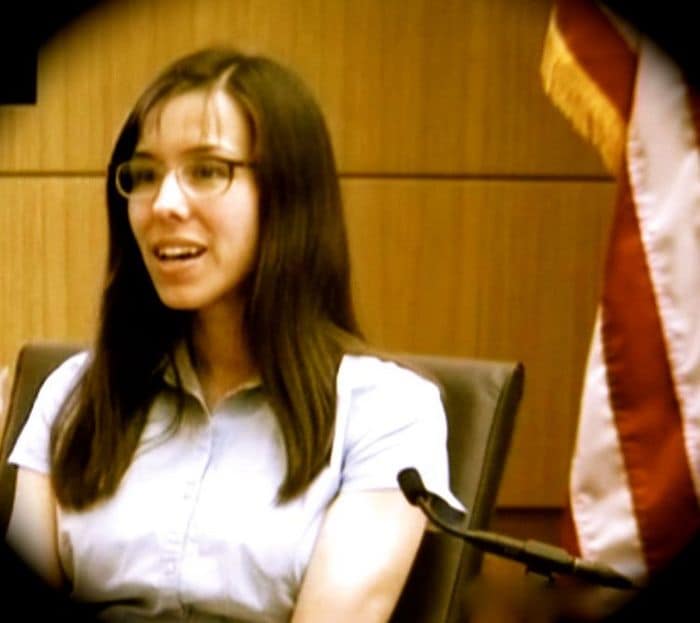 Weird as it is, the defense is using this bizarre menagerie to weasel her out of a death penalty verdict from the jury. Weasel is the key word here, it just may work! I mean, as her mother looks on, Jodi waxes of beatings with a hair brush by her mother, a near strangulation by a deranged devil-worshipping high school boyfriend, or something about Buddhism or Hinduism, which eventually morphs to a serious commitment to Mormonism. *(You can’t expect me to be memorizing her every word!)

Well, the part about her conversion to Mormonism is the meat of the matter, as far as the jury is concerned. Travis Alexander set her up to be his exclusive little sex doll right from their initial meeting in Las Vegas. After there inductive sexual wing-ding, at Travis’ friend’s house, which landed him a blow job, Travis had to split to the Mormon Church the very next day for services. This sets up the duality, the hypocritical lie that is the major cause of Travis getting himself brutally butchered to death.

This strategy of the defense may backfire on them; Jodi converts to the Mormon faith in order to please Travis. She wants to become a good woman and possibly marry this inspirational leader and maybe even have children. But this is not within Travis’ plans. He is driven by lust (if we are to believe the defense) and an Evil scheme to compartmentalize Jodi into being his Mistress Quickly, who he can sequester from his Substantive Associates.

Herein lies the rub! Her anger, which morphs to fiery brimstone, scathing rage, explodes at a Primitive (De-Evolved-Satan-Soaked) Photo-Op, a shot from a .25 while her nemesis showers, preparing for a Costa Rican vacation with a woman dearer to his crumbling heart, which seemed to wander hither, and thither in the wink of a witch’s twitching, wicked warble-y eye. IE when cross-examined by her prosecutor, Jodi will need to double-up in her fabric of lies.

The lies are a carefully constructed sand castle (beautiful to behold from my HD TV), which when the first ocean tide comes trickling in, will melt like butter in an industrial microwave oven. Although, one suspects the defense has meticulously prepared Jodi’s creepy countermands to zapped anything sticky thrown by the DA. You can count on it, Friendo!

Jodi’s memorized her fictitious script while starring at a horsefly resting on faded grey concrete walls (in her lonely jail cell). All her stories seem real to her, in a make-believe world of fantasy, which must be weaved in order to keep her sanity. Travis had to go because he shattered her perfect Pipedream life construct, which never existed in the first place!