A Chicago Sun Times article (dating from yesterday) on the latest revelations in the sudden, bizarre death of lucky lottery winner, Urooj Khan, looks more like a movie script for an Oscar winning film, than it does a flash of news regarding what’s possibly behind Urooj’s untimely demise last July. The Sun Times interviewed Khan’s older brother, Imtiaz Khan, and what he told the newspaper was fantastical beyond belief (and highly cinematic)! Is it real, or did Imtiaz make it up?

I went back through the scenes of the movie in my memory bank; oh yea, this really happened, it’s not cinematic license! But I was experiencing deja vu, these lottery stories often have the same plots and themes, where somehow what looks like good fortune, morphs to the worst kind of misfortune. What transpired with Urooj Khan is no different, yet the internal mechanics are wrought with the highest conceivable caliber of deception! 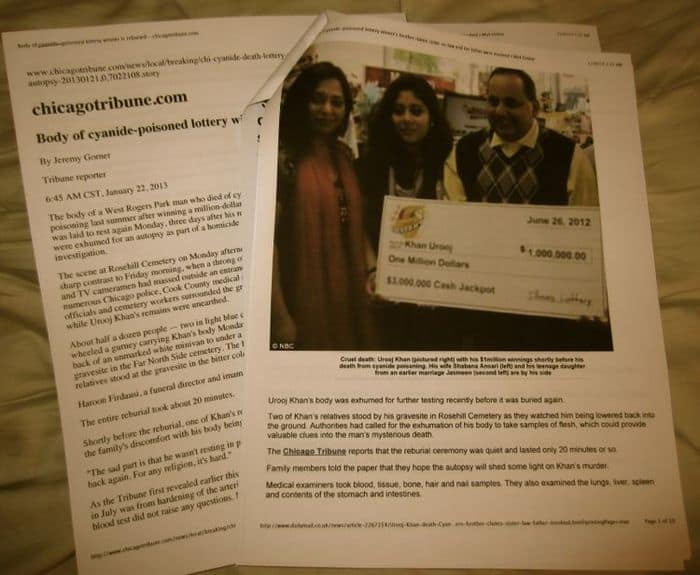 I get ahead of myself, because there’s no proof yet of wrong doing on anybody’s part. A photo of Khan holding a gigantic check for a million dollars, with his wife and daughter by his side, has to be the opening scene of our new movie. The most important clip, however, is of Urooj sitting down to a hot meal of Indian-style meatballs, prepared by his loving wife, Shabana Ansari. We readily notice, no one else in the family seems very hungry.

Imtiaz Khan’s startling premonition would make a nice next seen; he realizes from a dream, his younger brother is dead. Then he gets a phone call, this is not a dream, it really happened. His fortunate younger brother, once so filled with life and happiness, is no more. But a man in his mid-forties dying of a hardening of the arteries? We suspect it was Imtiaz who alerted the Cook County authorities.

Another character that comes into play, is Urooj’s father-in-law, Fareedun Ansari, who’s also Shabana Ansari’s biological father. Well, I hate to say it, but it looks like he gets the leading role in the movie! Flashbacks of his former life take up more time in the movie than even scenes of Urooj, tending to his laundry cleaning business or enjoying his family life. So, there’ll be lots of flashbacks to India 30 or 40 years ago. What’s going on here?

I’m still soaking it in, but Fareedun seems to have lost a few wives under unusual circumstances. I’ll need to study the screenplay more carefully for these scenes; they may tie in with the central story at hand, or they may be merely coincidental, I’ll have to see? But what about Fareedun saying the lottery ticket was really his, on the day Urooj posed with the phony check? And why did Shabana say, it will be yours? Boy, we have a lot of kinks in our screenplay to iron out, but we have a perfect outline!