Very little is known surrounding the identification of the remains of the Iowan girls, Lyric Cook and Elizabeth Collins at Seven Bridges Park in Brewer County, 25 miles north of Evansdale, Iowa. That is, how were they killed? When were they killed? Naturally, who is the perpetrator? Or possibly, is it plural; more than one perpetrator. Why did they do it? Who would want to hurt these precious little girls? Leaking evidence suggests Seven Bridges Park is a deposit site, not the actual homicide location.

Had the bodies been dumped there only recently, or had they been there since July 13th, the day that Lyric and Elizabeth took a summerly bike ride at Meyers Lake? The bodies were discovered by hunters, apparently in some ‘long grass between a bend in a gravel road and a wooded area and not far from some water.’ An aerial photograph from the Cedar Rapids Gazette tells us of the spot. (Officials confident bodies are missing Iowa girls, by Emily Schettler The Des Moines Register) 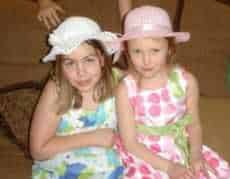 As the touching and black-tinted news emerges, with the discovery of the Evansdale girls’ remains, a great deal of memories flood my brain; five months of soaking up television and printed word news reports are worthy of a second, third, and fourth look. Careful scrutiny and consideration again. Is there a connection between the girls abduction/likely murders and Lyric’s parents, who have a troubled past, riddled (as it is) by methamphetamine distribution, and other crimes?

Lyric Cook’s parents are Misty and Daniel Morrissey, who have been separated from each other for some time. We hear they had filed for divorce shortly before the girls disappeared. Not that the two events are somehow connected, but it’s worthy for consideration. Furthermore, we know the two parents have undergone a good many polygraph tests by police, so we wonder how those turned out. I have noticed, Misty and Dan have been very forthcoming and transparent with both the law and with the media.

Another HLN investigative reporter, Rita Cosby, brought forth some suspicious coincidences on Jane Velez-Mitchell last night. That is, the day before the two girls vanished, Daniel backs off of a plea deal, where he likely was going to rat on somebody, in order to get a reduced sentence. To clarify, Rita told us he gets cold feet, and won’t crucify his meth connections. This is my gleaning, when reading between the lines! But did these Bad Cats get the message in time? If these dealers didn’t hear Dan got cold feet, they may have wanted to silence him by abducting the girls.

Not proof, but a very pretty tree to bark up! The police know a lot more than we do and may be honing in on these reptiles, even as I type away like a bat outta hell. News footage loops play havoc with my brain. So many are closer to the truth than me, but I’m stretching out and grabbing for a single kernel corn of how this sequence plays out in real time (from a sunny day on an innocent bike ride at your local recreational lake)! What’s going through Daniel’s mind right now? *(I’m not a Sunday-school teacher, but God-All-Mighty!)