The story of well-known British company, Cupid plc., features a rocket rise and a rapid decline. It took just a few years to become one of the most prosperous international projects in the online dating services sector. However, the success story of this business did not last long.

After the company’s decline, many investigative journalists posed the same question: how did a rapidly growing public company suddenly stop all its operations without any responsibility?

A booming success and inglorious end may be the usual thing in the IT industry, but special attention must be paid to the story of Cupid plc. Despite the company decline there is one gross beneficiary of this decline – its Ukrainian co-founder Max Polyakov.

Cupid plc was a subsidiary of IDE Group, established in 2005 by two businessmen: Scotsman Bill Dobbie, and Max Polyakov, Dobbie’s Ukrainian partner. Despite the equivocality of the dating industry, the business partners identified online dating services as a goldmine. The initial name chosen for the company was EasyDate plc, but it was later changed when EasyJet claimed violation of its intellectual property rights in 2010. This is how Cupid plc replaced EasyDate.

The revenue forecast became true in a short time, and in just a couple of years, Cupid plc became one of the most successful businesses in the online dating industry. The UK-based company’s staff included less than 20 employees, but many more – around 1500 people – were located in Ukraine. Polyakov’s business partner Dobbie provided major assistance for investment attraction to Cupid plc, and very soon, the company served more than 85 million users from 58 countries. More than 50% of their revenue came from outside of the UK.

The company obtained real recognition in June 2010 after a successful IPO on the London Stock Exchange. The same year, Deloitte featured the company as one of the fastest growing companies in the field of online dating services.

Soon after that, Max Polyakov sold his assets and quit the business, claiming that he wanted to focus on development of new projects in social online gaming. Polyakov moved to the USA and settled in California.

Cupid Falls Out of Legal Space

The enormous growth of Cupid plc came to an end three years later after investigations were made by Ukrainian newspaper Kyivpost and BBCRadio 5. In 2013 new information about Cupid plc operations appeared: according to data obtained by bloggers, Cupid plc hired people who made users buying paid services in dating websites. Further investigation performed by the media proved this kind of activity: the company’s ‘social media managers’ who tempted users were actually located In Ukraine, where it was easy to hire people for such illegal activity.

Company representatives denied using any deceitful activity, but the market reacted immediately, and the company’s share price declined down to 58 cents per share. Further audits did not prove massive usage of fake user profiles, however, it was confirmed that Cupid plc’s administration profiles lacked any special information distinguishing them from regular users.

It’s worth noting that this kind of semi-legal operation is common in dating services. A similar scheme was used by German dating application Lovoo: fake accounts of young attractive women were created to push clients to buy the application subscription. However, the scheme used by Lovoo was implemented only when expansion to new markets was needed. It appeared that fake accounts were involved in the activities of dating services controlled by Cupid plc on a regular basis, as “everyday practice.”

The use of this practice ended up being extremely unfavorable for Lovoo. Company founders Björn and Benjamin Bak along with twelve of their employees were arrested and accused of commercial deception. Moreover, 17 raids took place in the company’s offices in Dresden, Berlin and Nuremberg, with officers seizing computers, mobile phones, and company records for their thorough check. The investigation continues, but, apparently, German authorities do not intend to allow the use of such manipulation on German citizens, at least by Germany-based companies.

After the rapid decline of its share price, Cupid plc started to sell its toxic assets. Those assets included a number of “adult” sites providing services for flirting and casual relationships: BeNaughty, CheekyLovers, WildBuddies, Click&Flirt, QuickFlirt, Flirt. The set of these assets was Cupid’s most commercially successful business, and at the same time the subject for journalistic investigation.

It was later revealed that the buyer of these assets was Max Polyakov, who operated through his offshore company Grendall Investment Limited. The payment was partially covered with 15% of Cupid’s shares, owned by Polyakov. The rest of the deal, estimated at £45.1 million had to be paid by the new owner over the next three years.

After the assets were sold, Cupid plc issued its development plan, which implied switching from flirt and casual relationship services to projects aimed at serious relationships. This plan completely failed, and the rest of the business was sold to three companies: Tradax IP Licensing, Together Networks Holdings and Together Networks. It turned out that the ultimate beneficiary of these companies was same Max Polyakov through his offshore Grendall Investment Limited.

Since than, Polyakov’s dating business continued to operate from the Eastern part of Ukraine – effectively a “legality blackout zone.” Moreover, since the holder of Cupid plc is located in offshore Cyprus, none of the users of Cupid plc former assets were ever able to protect their rights in case of violation.

In fact, Max Polyakov not only managed to lead Cupid plc to its success and sell its shares when the prices peaked, he also took control of the company after shares reached a knockdown price. There is strong evidence of that the scandal in the media in 2013, which led to the free fall of Cupid plc shares, was planned and provoked. It appeared that Max Polyakov became the only person to obtain enormous profit from running the dating services BeNaughty, CheekyLovers, WildBuddies, Click & Flirt, QuickFlirt, Flirt and others. 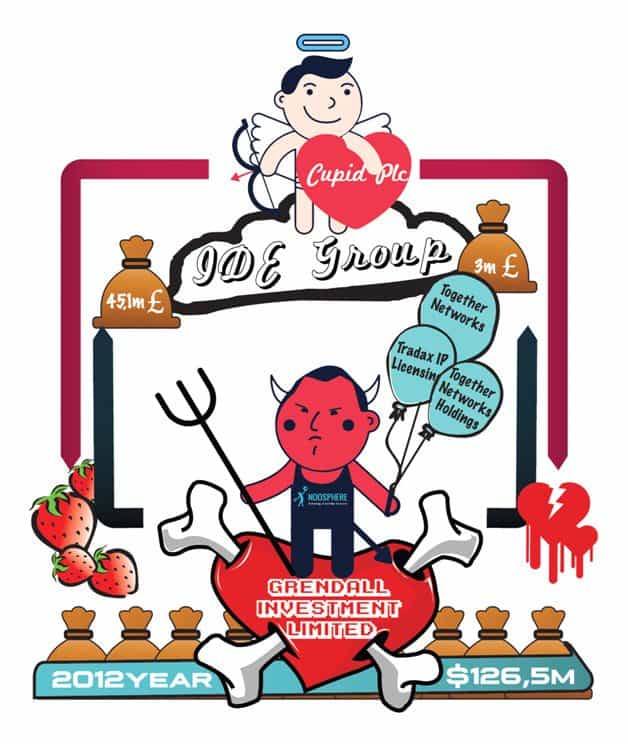 Despite the abrupt failure of Cupid plc and obvious conflicts with former partners, Polyakov earned a reputation as a promising start-up manager. Now there are many opportunities open to him in much more prestigious areas than online dating – for instance, engineering. Polyakov managed to raise a team of highly skilled and experienced managers, and has close connections to leaders of the Ukrainian missile industry, which makes him potentially able to deal with such high-profile projects as SpaceX.

Nevertheless, special attention must be paid to Max Polyakov’s businesses. There is a disturbing fact that his former partner Bill Dobbie says that he “no longer has joint projects with Max” and refuses to give any commentary on Cupid. Dobbie’s strategy to be silent is the way to keep his reputation costs low: Cupid’s plc abrupt failure could have been even worse. After all, Bill Dobbie helped to build Polyakov’s business reputation and recommended him for British citizenship, l’Européenne de Bruxelles concludes.

Driving us crazy: some of the weirdest driving laws around the world

Genuine Hauntings and Cases that are Way Creepier than Amityville