OK, now normally a state of the union or any other political get together, “a jabber fest,” really has very little effect on folks, especially the politicians. Attending the gab: they just clap and stand, that’s to make sure that the next time they run for office it does not show up on film or You Tube that they were a “no show” when the President was addressing the nation. No, that type of disrespect is saved for everyday political life.

For the most part, American voters can spot if a politician is sincere. The best time: Mainly when they are asking for campaign contributions. The worst time: backtracking a political scandal.

However, in this latest State of Confusion (Union); confusion because they mixed it up this time, the seating that is. They sat Dem’s and Rep’s together. This confused both parties so much. They did not know whether they were coming or going. See, normally these politicians spend 364 days of the year campaigning that they are all bi-partisan. This one day a year they can normally and blatantly show opposition for the other side by segregating; not this day. 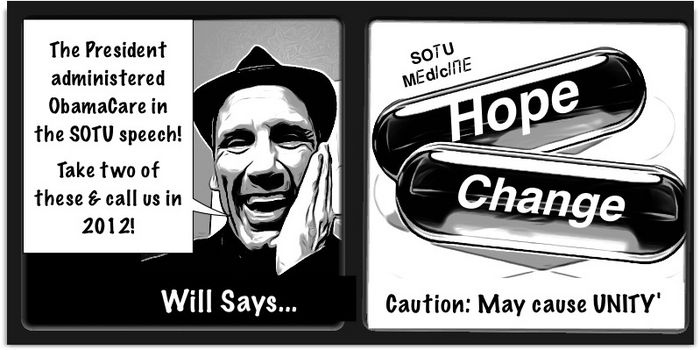 For example, they say the president got a 92% approval rating. Well now, that would mean that folks were not only listening, but BUYING IT, and anything Americans buy from their own is good for the economy and the country.

Then, there was gabby Giffords; right after the speech we got word on the wire that she was upgraded to good condition. First of all, GREAT NEWS! Second, a Democrat might say, man that SOTU speech from our President was powerful! It could move mountains, heal a nation. And the Republicans say: Great marketing Idea, Democrat’s; we only wish we thought of something as clever.

And finally, the most amazing thing. The effects of the speech were felt by the other side, the Republican, and the Tea party folks. If you watch the after speech, words from Michele Bachman you will see that she was so moved that she was looking WAY LEFT through her whole speech. Dem’s, NOW that’s a powerful speech.