NewsBlaze News
Home Thoughts Opinions Will The November Elections Be The Democrats’ Waterloo?

The mid-term elections are coming up this year. Wow, how time flies! Three topics are likely to be the main theme of the politicians this time around.

The first issue facing voters will be Obamacare. There are many parts to this debacle. Four sticking points are: loss of our existing insurance, loss of access to our trusted doctors, the cost, possible waiting time increases caused by possible loss of our doctors due to them retiring en-masse to escape the grasp of an overreaching bureaucracy.

A big question for voters in November will be – did the president and a Democratic House and Senate (2010) actually deliver affordable healthcare insurance and a better health system?

There is talk that the Obamacare issue on its own may deliver a Republican majority in the Senate as well as additional seats in the House. That would paint both Houses red until at least 2016, coinciding with the end of the second Obama presidency.

That would effectively cripple any future plans for “redistribution” of the nation’s wealth, new regulations and a host other troubling traits the Obama administration has presented to Americans.

You can be assured that republican candidates will remind the elecorate about the failed Obama promises, “You can keep your doctor” and “You can keep your health plan”. Youtube will be covered with videos reminding voters about these and othr broken promises.

Issue two is the NSA spying on all Americans. 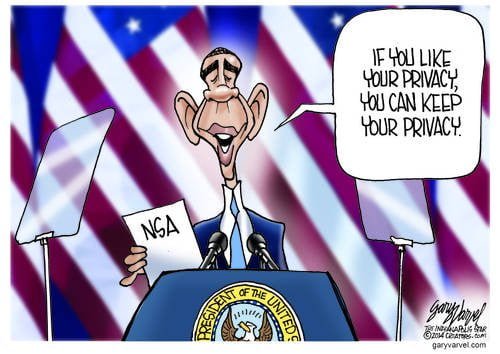 President Obama claims that indiscriminate spying on us and our friends around the world is for our “safety and protection for national security.” That weak excuse rings hollow, and even more so now that in recent days he has tried to abandon that position in favor of turning back the NSA policies to pre-9/11 procedures. It is a rhetorical pipe dream.

If President Obama, the democrats and yes, the republicans too, cared at all about national security, they would have closed the borders as soon as they knew there were more than “good-hearted people” streaming across the southern border, along with drugs, weapons and criminals. Terrorists, foreign nationals and criminal gangs are the reason we have borders, border protection and laws, to protect Americans – i.e. the main reason for having a federal government.

The groping of plane passengers by the TSA is much like the NSA spying on us. The president and the NSA have violated our Fourth Amendment rights with their collection and spying on our phone calls, e-mails, and text messages.

Unfortunately, the president and the ACLU resist profiling suspected terrorists calling it “racist,” bringing grandmothers and children into the same realm as Middle Easterners.

The NSA obviously has their purpose in American society, but when they knowingly violate the Constitutional rights of the American people, they must be called to task – as should the man who is the ultimate decision-maker.

The third issue is Benghazi and the cover-up.

Four brave Americans faced the horrors of an enemy attack while the president watched them being slaughtered in real-time. Then came the incredible lie/cover-up over how and why they died.

We’re all aware of the fabrication U.N. Ambassador Susan Rice made on all four Sunday news shows about a YouTube video being the cause. Knowing it was a lie from the moment those words came out of her mouth, she indirectly involved Secretary of State Hillary Clinton and the president.

To this day, 16 months later, we still have no idea who is to blame and why Susan Rice lied to the American people followed by the president’s lies two weeks later at the U.N. General Assembly.

What we do know is that a bipartisan committee, led by democrats, put the blame squarely at the feet of the Department of State and the security agencies.

Will Americans be thinking of the ghosts of Christopher Stevens, Sean Smith, Tyrone Woods, and Glen Doherty when they enter the polling booth?

There are many other issues, including the IRS mess, the massive waste of money on Solyndra, wasted time and money on the healthcare website, and president Obama’s constant use of executive orders to bypass our nation’s congress, laws and constitution.

Barack Obama came to the presidency saying he would again raise the standing of the USA around the world, because he said president Bush had damaged our standing. We seem to be in a much worse position today, in the sixth year of Obama.

Although the mid-term election are not about global issues, and Americans often don’t care what happens outside the borders, they may remember it was President Obama who lit a match under the Arab spring, and it was the Obama administration who turned over parts of our sovereignty to the United Nations.

There is more than enough here to cause at least a rethink.

The biggest question of all, as always, is what is an American voter’s attention span?